In a series of posts on his Sina Weibo microblog, Huang An (黃安), a 53-year-old singer born in Taiwan and based in China, accuses 16-year-old Chou Tzu-yu (周子瑜), better known as Tzuyu, the only Taiwanese member of the popular South Korean girl group Twice, of supporting Taiwan independence.

Huang mentions Chou's waving of the Republic of China's (Taiwan) national flag on a South Korean TV show last year, and accuses her of working with the independence-leaning Taiwanese media outlet Sanlih E-Television, which he says has been promoting her as "the pride of Taiwan independence celebrities" and the "pride of Taiwan," without offering any proof that Chou is collaborating with Sanlih.

Prior to this, Huang had been calling out Taiwanese celebrities he suspected were pro-Taiwan independence on his microblog -- a pattern of behavior that has drawn widespread criticism in Taiwan. Some of these celebrities have had their shows in China canceled as a result, and Huang seems to be trying to prevent Twice from appearing on Chinese New Year variety shows.

Huang continues to defame Chou on his microblog, and netizens in China begin to attack Chou on social media sites and her fan pages.

Changes are made to Chou's profile on the website of her management company JYP Entertainment, the media report. The section which originally reads "nationality: Taiwan" is changed to "birthplace: Taiwan." The same changes are made to the profiles of other Twice members.

Glory Zhang, chief marketing officer of Huawei's consumer business group, says in her microblog that South Korean cellular carrier LG Uplus, which markets the Huawei Y6 phone in South Korea, has suspended all cooperation with Chou and her management company on Huawei products, after Huawei strongly advised it to do so.

News surfaces that China's Anhui TV has withdrawn its invitation to Twice to appear on its show.

Later that day, JYP Entertainment issues a statement saying it "deeply regretted" that false rumors were being spread online about its celebrity. It says that the company and Chou have never engaged in any political action or made any political comments regarding China.

The company says, however, that it has decided to cancel all of Chou's upcoming performances and activities in China until the rumors are clarified.

When asked about the controversy, Taiwan's presidential candidates Eric Chu (朱立倫) of the ruling Kuomintang (KMT) and James Soong (宋楚瑜) of the smaller People First Party call on the Taiwanese to support their country and national flag.

The KMT says in a statement that the ROC's existence cannot be denied and urges the Chinese people to take a rational view of the matter and not let politics affect the entertainment sector.

A top official from Taiwan's Mainland Affairs Council says culture and the arts should not be mixed with politics and calls on both sides to respect each other.

Later that night, JYP issues a statement, saying that Chou "firmly supports and respects the 'one China principle,'" and that being Taiwanese does not mean she is in favor of Taiwan independence.

Democratic Progressive Party presidential candidate Tsai Ing-wen (蔡英文) responds to the incident, saying any Republic of China citizen should have the right to hold the national flag of their country, and they should not be oppressed because of it.

The media report that the section which states "birthplace: Taiwan" on Chou's biography on the JYP website has been changed to "birthplace: China, Taiwan," drawing an angry response from the Taiwanese public.

Later that day, Park Jin-young, founder and CEO of JYP Entertainment, issues a statement, in which he deeply apologized for not recognizing the seriousness of the incident.

He says he has learned that to collaborate with a country means respecting its sovereignty, culture, history, and its people's feelings. He says it is his fault and his company's fault for not educating Chou adequately enough and announces that Chou's activities in China would be suspended.

JYP also releases a video on its YouTube channel showing Chou bowing to the camera and reading from a prepared text, "there is only one China... I have always felt proud of being Chinese."

In the video, Chou says she had "hurt the company and the feelings of netizens on both sides of the Taiwan Strait due to my inappropriate words and actions during activities abroad. I feel very, very sorry and guilty."

The clip makes headlines on the websites of Taiwan's media outlets and creates an uproar in Taiwan, with many blasting JYP, Huang An and Chinese netizens for forcing Chou to make the humiliating apology.

Presidential candidates and politicians in Taiwan condemn the release of the video and reiterate their support for Chou.

The Taiwan Affairs Office of China's State Council says the incident was being used by some political forces in Taiwan to "stir up the feelings" of people across the Taiwan Strait and urges people to be vigilant over this.

Yahoo Kimo News says it will no longer post any comments made by Huang An, while KTV company Melody (美樂地) announces it will pull all of Huang's songs off its KTV shelves.

The official website of JYP is shut down, allegedly by hackers.

In her victory speech, President-elect Tsai Ing-wen says news about the incident has shaken Taiwanese society.

"This particular incident will serve as a constant reminder to me about the importance of our country's strength and unity to those outside our borders. This will be one of the most important responsibilities for me as the next president of the Republic of China," Tsai says.

The controversy attracts coverage from international media, including The Washington Post, New York Times and BBC.

Huang An announces in a microblog that he will return to Taiwan on Feb. 3 to address the incident in a press conference.

Apple Daily reports that Chou's mother, who is now in South Korea with the singer, expressed the hope that the incident will be over soon so her daughter can go back to performing. 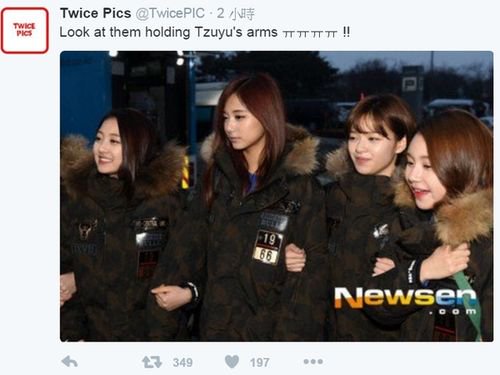 Local human rights lawyer George Wang (王可富) and others file a complaint with prosecutors against Huang An and JYP, alleging that they interfered with Chou's freedom and forced her to do something she has no obligation to do.