The forum, titled "The Transformative Nature of Sports on Women and Girls," was organized by the American Institute in Taiwan (AIT) as part of year-long activities to celebrate the 40th year of the Taiwan Relations Act (TRA).

The TRA, which forms the cornerstone of Taiwan-U.S. relations, was signed by then-President Jimmy Carter April 10, 1979, retroactive until Jan. 1 of that year, when the U.S. switched diplomatic recognition from Taipei to Beijing.

The AIT was established later in 1979 to promote unofficial substantive relations between Taiwan and the U.S.

Warlick told the more-than 100 students who attended the forum that women should be given equal opportunities to men in sport and that there are many things can be learned from sport, such as discipline, work ethic, confidence and leadership.

She also shared a story about how a hearing-impaired player regained her confidence through basketball and even became an Olympian. "She let basketball do a lot of her talking," Warlick said.

Jue, who worked as an accountant by day and a basketball coach in the evening during her younger days, told the audience that she fulfilled her wish to be a coach thanks to the support of her parents, husband and the rest of her family.

Admitting that there were barriers along the road to success, Jue said that "it is up to you, as you guys are students here, to take that chance."

She reminded the students to hug their parents to express their love when they got home, as parents are the ones who support them on the road to success. 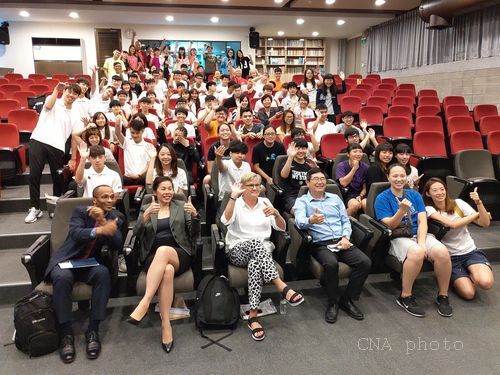 Eric Aldrich, the cultural affairs officer at the AIT, and Chi Li-kang, (季力康), dean of NTNU's College of Sports and Recreation, also attended the forum.

Warlick was a member of the 1980 U.S. Olympic basketball team and is a U.S. Women's Basketball Hall of Famer, while Jue is the only Chinese-American head basketball coach in the National Collegiate Athletic Association, the group that administers U.S. college sports.

They will depart July 22.