As of Wednesday afternoon, at least four people had died, 247 were injured and dozens remained unaccounted for due to the strong earthquake, according to data compiled by Taiwan's Central Emergency Operation Center.

The mainland is highly concerned about the devastating effects of the powerful earthquake, including significant property damage and loss of life, An said.

The TAO and China's Association for Relations Across the Taiwan Straits (ARATS), the semi-official body that handles cross-strait affairs, have activated an emergency response mechanism to better understand disaster's impact and scope of relief efforts, An said.

The spokesman said TAO director Zhang Zhijun (張志軍) expressed his condolences and sympathies to the victims of the tragedy and offered to provide disaster relief assistance, while talking on the phone with Hualien County Magistrate Fu Kun-chi (傅崑萁) on Wednesday.

Zhang also said China would provide any necessary relief assistance, including dispatching a rescue and relief team to Taiwan, to help the victims overcome difficulties and rebuild their homes. 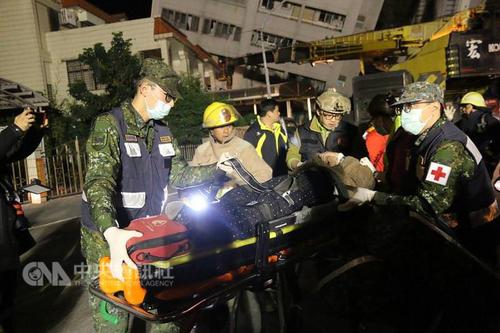 Meanwhile, Chinese authorities are seeking information about the safety of Chinese visitors, students and spouses of Taiwanese in the affected area through various channels, according to An.

Chang Hsiao-yueh (張小月), head of the Mainland Affairs Council (MAC), Taiwan's top agency in charge of China policy, said it has sent personnel to help the families of the injured Chinese nationals come to Taiwan.

(By Lin Ke-lun and Evelyn Kao)