Taipei, May 24 (CNA) Several foreign representatives to Taiwan Friday attended a joyful collective wedding ceremony held by Taipei City Government to celebrate the union of gay couples who were legally allowed to marry for the first time that day.

"Today is an important moment in Taiwan's history. Today love trumps all," Canadian Trade Office in Taipei Executive Director Jordan Reeves said in his congratulatory speech to 20 same-sex couples who completed their marriage registration at the Household Registration Office in Taipei's Xinyi District. 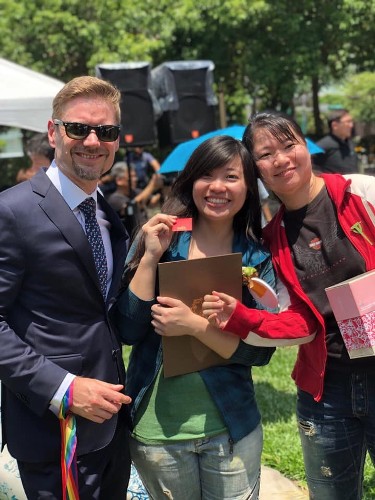 Reeves said that Canada, which legalized gay marriage in 2005, is proud to be standing with the gay newlyweds on the first day Taiwan legalized same-sex marriage. "I hope that one day, everyone around the world will have the right to choose who they love."

Madeleine Majorenko, head of the European Economic and Trade Office, said she felt proud to be there, sharing in the couples' happiness and the love they share for each other.

"From the bottom of my heart, and from everybody in Europe, I want to wish you a wonderful happy life," said Majorenko, whose office represents the European Union's (EU) interests in Taiwan in the absence of official recognition from the bloc.

Spanish Representative to Taiwan Jose Luis Echaniz, whose country was among the first few nations in the world to recognize same-sex marriage, thanked the city government for inviting him to such a happy occasion.

"It is not very often at this age that I get invited to weddings. I am very happy to be here," Echaniz said, inviting Taiwanese people to travel to Spain to get a taste of his country's vibrant and active gay community and take part in its annual pride parade.

Andrew Pittam, deputy representative of the British Office in Taipei, extended his congratulations to the 20 married gay couples, who he said are among the first people in Taiwan and in Asia to have registered for same-sex marriage. 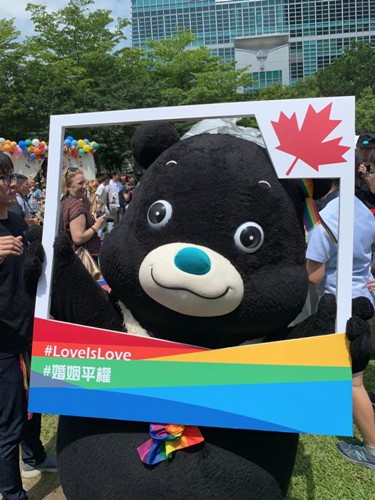 "I think making marriage equal to everybody is incredibly important," Pittam said. "It is a fundamental human right and it says a lot about the state of democracy here in Taiwan. So congratulations."

Meanwhile, some foreign representative offices took to social media sites to congratulate Taiwan on becoming the first in Asia to legalize same-sex marriage.

"Only in a democracy such as Taiwan's can human rights and civil rights be protected and nurtured. The Taiwan LGBT community's quest for equality has been an inspiring journey and an example for the entire world," the American Institute in Taiwan (AIT) said in a Facebook post Friday.

The AIT said democracies like Taiwan and the United States must constantly strive to assert the equality and dignity of all people, regardless of their sexual orientation and gender identity, race and religion.

"Today, we acknowledge the implementation of Taiwan's milestone legislation on same-sex marriage," it said on Facebook with the hashtags #loveislove, #lovewins.