Taipei, Sept. 4 (CNA) A Swedish YouTuber who makes videos about his explorations in Taiwan said Wednesday that he wants to introduce the country's sights and travel convenience to other foreign visitors.

Lukas Engström, who has made some 37 videos documenting his travels in Taiwan, said there are so many different things that can be done in one day because of the travel convenience.

"You can literally go buy a Louis Vuitton bag and then go hiking to a waterfall afterward," he said. "You can fit those two things into one day, and following that, you can still make it back (to Taipei) to have a luxury meal at some rooftop restaurant."

One can take a 30-minute train or bus ride from Taipei to find a waterfall, which is very different to Sweden, he said, adding that he is originally from the countryside, where it takes an hour just to get to the city.

Amazed by the waterfalls and hiking trails in Taiwan, Engström said he refers to the forests in Taiwan as "jungles."

"I know that is not the correct term, but it is very exotic and full of loud natural sounds," he said, adding that Taiwan's wilderness is "untouched."

"A lot of people say Taiwan is very small, but it literally has everything and has the most amazing forests, waterfalls and hiking paths," he said.

One of his most-played videos "Taiwan's MOST EXTREME Hike: Wu Liao Jian (五寮尖)," which was posted Dec. 20 last year and has over 97,100 views, shows scenic shots taken with a drone and how Engström managed to complete the seven-kilometer hike with a 900-meter total ascent and descent in New Taipei's Sanxia District.

"To this day, it is the worst decision I have ever made. It was so tiring because it took around two hours of non-stop climbing with ropes. After you have reached the top you have to descend a massive cliff, where if you fall, you're dead," he said.

Another popular video, which has accumulated over 52,583 views, is "Best One-Day Trip from Taipei! Teapot Mountain in Jiufen, Taiwan!" The video was published Sept. 7, 2018.

Engström described the view as "unbelievable" once he climbed to the top of the mountain.

Prior to getting serious about making YouTube videos about a year ago, Engström said he first discovered Taiwan in 2011 when he arrived in the country as an exchange student studying business-related courses at Soochow University.

After his studies he returned to Sweden to finish his course but has been coming back to Taiwan to learn Mandarin in the ensuing years.

"I have only explored about 3 percent of Taiwan," Engström said, adding that he will continue his adventures to share the beauty and qualities of Taiwan with other foreigners. 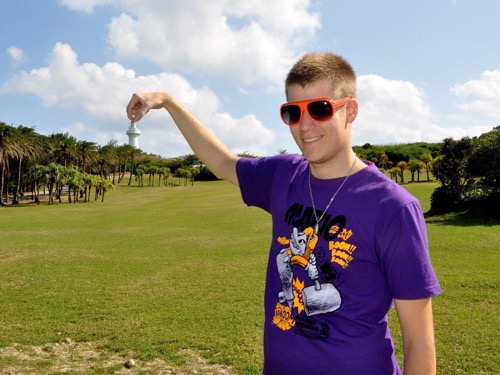