Muslims to celebrate Eid al-Fitr in Taiwan this week

Taipei, June 3 (CNA) With over 270,000 Indonesian migrant workers in Taiwan, government departments and agencies across the country will hold events and festivals this week to mark the end of the Muslim fasting month of Ramadan.

Muslims in Taiwan are joining their counterparts around the world to celebrate Eid al-Fitr, the "festival of the breaking of the fast," which is observed at the end of Ramadan, the ninth month on the Islamic calendar, in which worshipers abstain from eating and drinking from sunup to sundown.

The timing of Eid al-Fitr begins with the first sighting of the new moon, as per the Islamic lunar calendar.

Taipei City's Department of Labor (DOL) has planned to host the Pesta Idul Fitri 2019, on Wednesday at the city's main transport hub, Taipei Main Station, where Muslims in northern Taiwan can get together to mark the occasion. 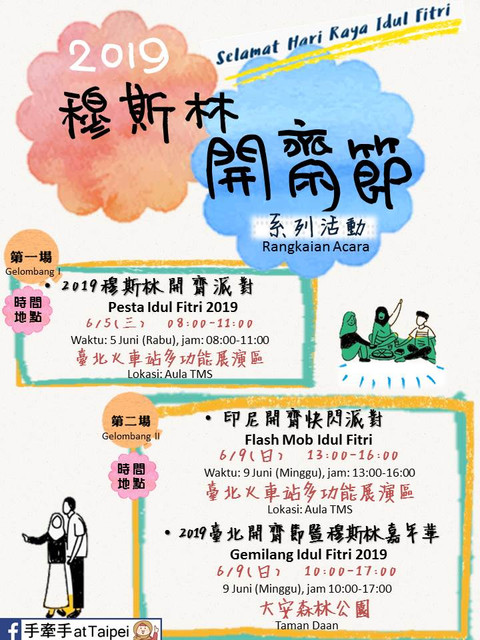 Huang Shu-yuan (黃淑媛), a section chief in the city's Foreign and Disabled Labor Office, said on Monday that they will prepare small gifts for games they will organize that day.

Taipei Deputy Mayor Tsai Ping-kun (蔡炳坤), will also visit and share food and snacks with the Muslim community at the event, which will kick off at 8 a.m. and run through to 11 a.m., Huang said.

Following the event, the DOL will also hold a Flash Mob Idul Fitri on Sunday, an event in which Taiwanese will exchange gifts with Indonesian migrant workers to promote friendship between the two communities, Huang said.

A larger event also celebrating the breaking of the fast, the Gemilang Idul Fitri 2019, organized by Taipei City's Department of Information and Tourism, will be held 10 a.m. to 5 p.m. that same day in Taipei's Da'an Park, the official went on.

According to a statement issued by the DOL on Saturday, the Gemilang Idul Fitri 2019 will host a market featuring products from Muslim communities around the world, in addition to Indonesian-themed performances and Muslim-themed outdoor lectures.

Meanwhile, similar events will be held across Taiwan, including Keelung, Taoyuan, Yunlin, Yilan and Penghu on Wednesday, Tainan on Friday and Saturday, Changhua on Saturday, and Pingtung on Sunday. 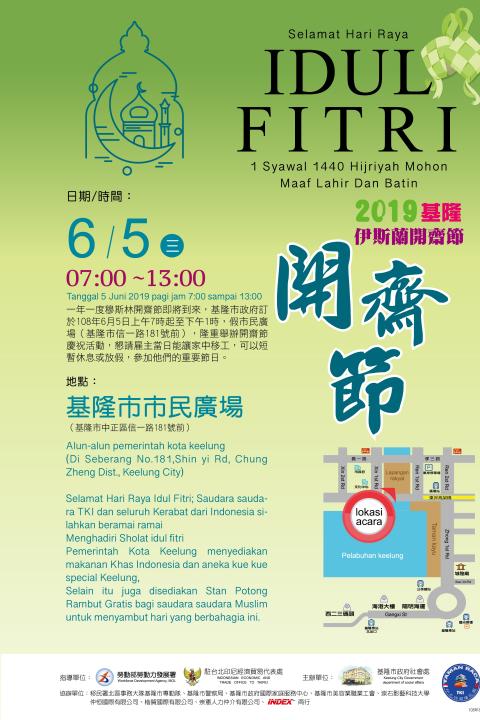 The "Selamat Hari Raya Idul Fitri" will be held 7 a.m.-1 p.m. at Keelung Civic Plaza Wednesday, while the "2019 Taoyuan Eid al-Fitr Event" will kick off 7 a.m. that same day at the Jianguo Yunlin Joint Community Hall in Taoyuan. 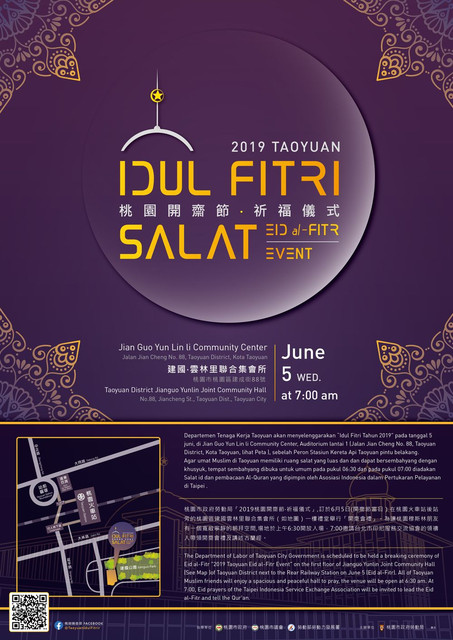 A celebration will be held 8 a.m. until noon Wednesday next to the National Immigration Agency's service center in Yunlin County.

Events will also be held in Yilan County from 7 a.m. Wednesday in two locations -- one at the county's Farmer's Association in Yilan City and the other at Nan'an Junior High School in the county's Su'ao Township.

The offshore county of Penghu will also celebrate the event, inviting Muslim fishermen to its Penghu Youth Activity Center between 9 a.m. and 5 p.m. on Wednesday.

In Tainan, the event will be held from 9 a.m. to 14:30 p.m. at the city's Minde Junior High School and Taiwan Sugar Corp.'s Shanhua Sugar Factory on Friday and Saturday, respectively. 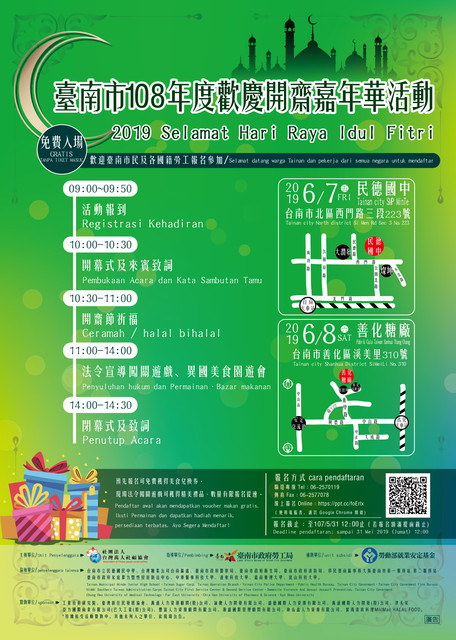 The celebrations will also be held from 8:30 a.m. to 2 p.m. Saturday at the car park of Changhua railway station in Changhua City, and in Pingtung from 9 a.m. to 4 p.m. Sunday at the open space in front of the county's Department of Labor Affairs. 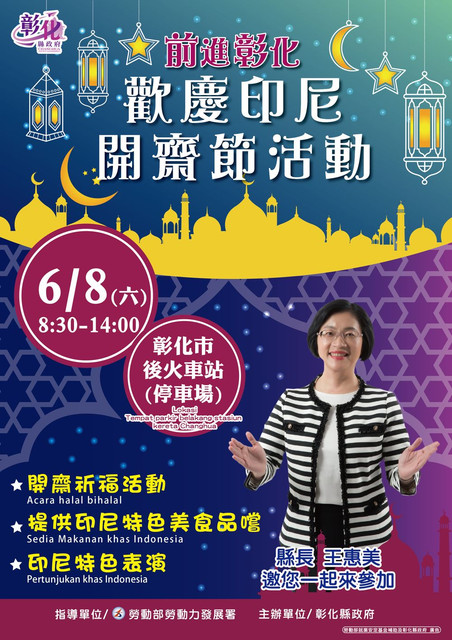