Taipei, Sept. 4 (CNA) A coalition of human rights groups held a rally in Taipei Wednesday to demand an inquiry into the death of an Indonesian national who they believe could have died as a result of delayed medical treatment due to her status as an undocumented migrant worker.

At the rally, held outside the Control Yuan, Allison Lee (李麗華), secretary-general of Yilan Migrant Fishermen's Union, told CNA that the circumstances surrounding the death of 32-year-old Sri Kodriawati were unclear, after she sought treatment at Chu Shang Show Chwan Hospital in Nantou in May suffering from a major stomach ache.

A death certificate issued by the Nantou District Prosecutors Office showed that Kodriawati died May 11 at 7:46 p.m. "upon arrival at the hospital," but failed to indicate a cause of death.

However, Kodriawati's boyfriend has stated she was alive when he took her to the hospital, Lee said, adding that shortly after she was admitted to the emergency room, he was taken away by law enforcement authorities and detained for being an undocumented migrant worker.

Kodriawati came to Taiwan on Feb. 19, 2017 to work as a caretaker in Hualien before running away from her official place of employment to join her boyfriend working for a construction company in Nantou's Zhushan Township, Lee said.

"We suspect that proper medical treatment may have been delayed or possibly withheld, because it seems the hospital prioritized notifying law enforcement about the undocumented migrant workers," Lee said.

"We hope the Control Yuan will investigate Kodriawati's cause of death and whether she received treatment on arrival at the hospital," she said, adding that the hospital has so far refused to release any medical records to her.

Wallace Huang (黃昱中), legal consultant for the Yilan Migrant Fishermen's Union, said it is suspected Kodriawati was just left in the emergency room without a translator because law enforcement took her boyfriend away.

"She may have just ended up lying there without proper medical treatment," Huang said.

Lennon Ying-dah Wong (汪英達), director of the service center and shelter for migrant workers under the Serve the People Association in Taoyuan, stressed the importance of medical ethics and treating people regardless of whether they are undocumented migrant workers or not.

"No one is illegal," Wong shouted as he explained that the hospital should prioritize treating patients in emergency situations regardless of their status as undocumented migrant workers.

In response to a phone call made by CNA to Chu Shang Show Chwan Hospital in Nantou, a public relations officer said she did not have the medical records at hand but added that the hospital tries to save all patients facing medical emergencies regardless of whether they are undocumented migrant workers or not.

Meanwhile, a representative from the Control Yuan could not be reached for comment despite repeated attempts by CNA to request an official statement on the matter. 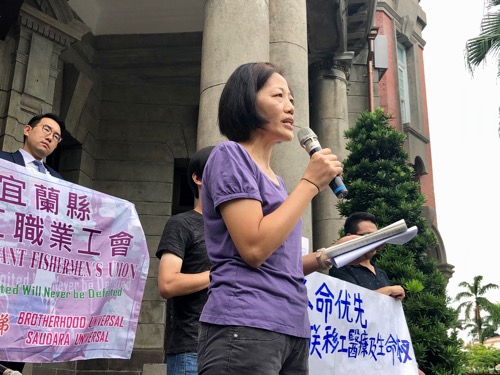 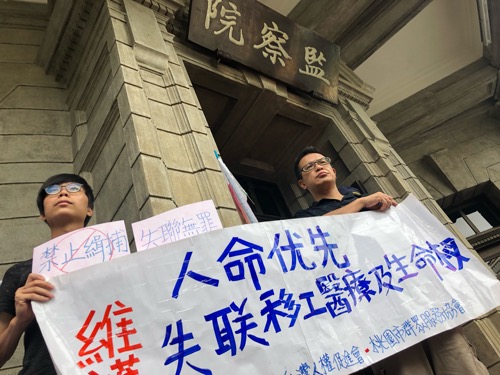 Lennon Ying-dah Wong (汪英達, right), director of the service center and shelter for migrant workers under the Serve the People Association in Taoyuan