Taipei, Aug. 7 (CNA) A top official at the Taiwan Swinging Skirts LPGA said Wednesday that the organizers hope to attract up to 50,000 fans on the tournament's final day.

Johnson Wang (王政松), chairman of the Swinging Skirts Golf Foundation, made the comment at a press conference to promote the event Wednesday, adding that the competition is looking to attract a total of 75,000-80,000 golf fans over the span of four days.

The target came about after 32,000 visitors attended the final day of the tournament last year, close to a record for the number of attendees at a golf event in the Asian region on a single day, he said.

"If these numbers are reached then the Taiwan Swinging Skirts LPGA championship will break all visitor records in Asia, including South Korea and Japan," Wang said.

In order to attract up to 50,000 visitors on the last day, Wang said, gifts will be given to each visitor when they arrive and special gift bags will be offered to those who visit each of the 18 holes.

Audience members also have a chance to enter a raffle, with prizes ranging from motorcycles to electrical appliances, Wang said.

The tournament, which will be seen in over 170 countries and regions, seeks to promote the beauty of Taiwan, Wang said.

"This tournament is a classic sporting event in Taiwan and we hope to use it to promote the image of Taiwan and place the country on the international stage," he said.

Meanwhile, Taiwan's former No. 1 Yani Tseng (曾雅妮) is unsure if she will be able to attend the tournament, Wang said.

Tseng, the tournament winner in 2011 and the only Taiwanese title holder said she is still recovering from an injury and has been advised by her doctor to rest for the remainder of the year.

Even if the roster does not include Tseng, the organizers said they will still invite the top 62 players in the world to participate.

The Taiwan Swinging Skirts LPGA, now in its ninth year, will be held Oct. 31 to Nov. 3 at the Miramar Golf Country Club in New Taipei. 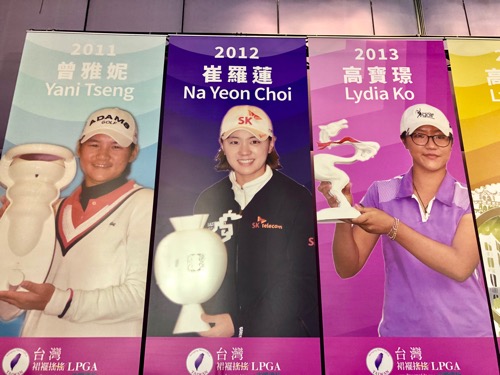