Key elections get underway in Taiwan 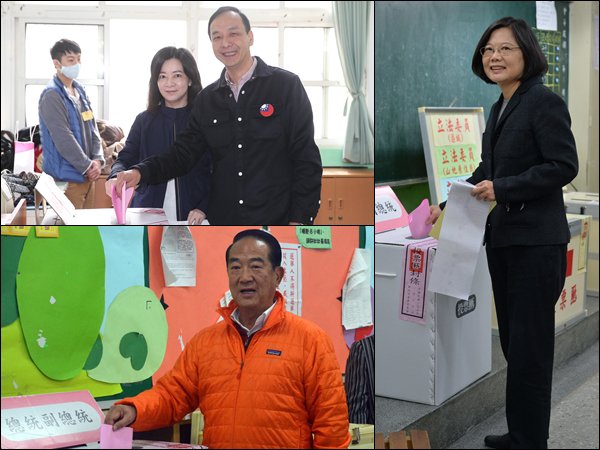 Taipei, Jan. 16 (CNA) Taiwanese voters go to the polls Saturday to elect a new president and a new Legislature, with early results expected to come in within hours after voting stations are closed at 4 p.m.

There are just over 18.78 million eligible voters in the country's 22 cities and counties, according to the Central Election Commission (CEC). They will cast their votes in a total of 15,582 polling places, where the votes will be tallied right after polling closes and reported to local and central election authorities.

The polling places were opened promptly at 8 a.m. with the weather clearing but remaining chilly in northern and eastern Taiwan. Some sporadic showers are expected in these parts of the country during the day.

It is likely to be cloudy with some sunshine in central and southern Taiwan, with temperatures ranging from 14 to 26 degrees Celsius. Temperatures will stay below 20 degrees in northern and northeastern Taiwan but highs can go up to 23 degrees in the southeastern county of Taitung.

Tsai Ing-wen (蔡英文) of the main opposition Democratic Progressive Party, Eric Chu (朱立倫) of the ruling Kuomintang, and James Soong (宋楚瑜) of the minority People First Party are competing in the presidential race.

When the last elections were held in 2012, President Ma Ying-jeou (馬英九) won re-election by receiving 51.60 percent of the votes, compared with 45.63 percent won by Tsai. The turnout was 74.38 percent.

Ma's KMT won 64 seats in the Legislature, compared with 40 seats for the DPP.

This year, a total of 556 hopefuls from 18 different political parties are seeking to fill the 113 seats in the Legislature, the CEC said. Thirty-four of those are at-large seats determined by votes cast for the individual political parties.

●Over 300 candidates registered for legislative elections

The new president will take over from Ma, who will step down on May 20 after serving two four-year terms, while elected legislators will be sworn in next month.

(By Elaine Hou and Jay Chen)ENDITEM