Taipei, Sept. 17 (CNA) The interior minister Tuesday encouraged new immigrants who have received their national identification cards to vote in the upcoming presidential and legislative elections early next year.

Minister of the Interior Hsu Kuo-yung (徐國勇) said at a mock vote event in Taipei that it is important for new immigrants who have received their national IDs and are eligible to vote to do so, so that they can help protect Taiwan's free and democratic society.

New immigrants are Taiwanese citizens as well and they have the right to vote for their preferred candidates, Hsu said.

Even though many new immigrants have lived in Taiwan for a long time, there are some who have just received their national IDs and have not yet had a chance to experience the country's voting process, he said.

Meanwhile, the mock vote event, which was held in the lobby of the Taipei City Service Center, also invited Taiwanese who received their national IDs this year to demonstrate the procedures of voting to scores of new immigrants originally from Vietnam, Indonesia, Thailand, the Philippines and Cambodia who will be voting in the elections Jan. 11, 2020.

Evans Jonathan Paul, an American linguistics professor who was naturalized as a Taiwanese citizen in May, was the first to demonstrate.

He said he was very happy and "found it very important to be able to have the eligibility vote like the rest of the Taiwanese," Paul said.

"I have been interested in becoming a Taiwanese citizen for a long time. I have lived in Taiwan for 16 years and I feel I want to contribute in this way," he said.

Chen Yu-shui (陳玉水), a translator originally from Vietnam who has been living in Taiwan for nine years, was the second person to demonstrate the voting procedure.

The upcoming elections will be her first time to vote in Taiwan, after receiving her national identification card this year, Chen said.

"I think today's event was really helpful because I have no idea about the procedures inside a polling station," she said. "After the mock vote today, which was conducted in a step-by-step manner, I now clearly know what to do." 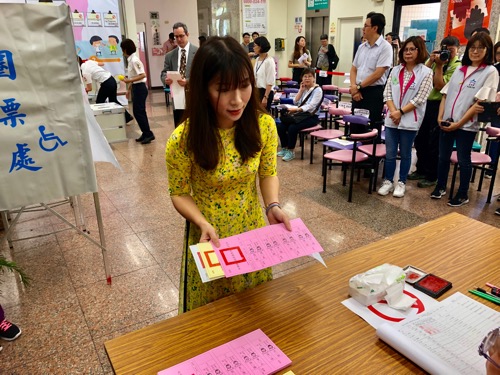 Regarding violations that are commonly found at polling stations, Hsu reminded all voters to not rip up their ballots even if they happen to make an error, such as voting for the wrong person.

"Destroying the ballot paper, such as ripping it up, or taking it outside of the polling station, are violations," he said. "Other more serious offenses include bribery, which often comes with a sentence of three to 10 years."

Su Hui-wen (蘇慧雯), director of the NIA's Taipei City Service Center Northern Administration Corps, said statistics show that there are currently 270,419 new immigrants in the country who have received their national IDs, with the number of eligible voters in that group estimated to be just under 260,000. 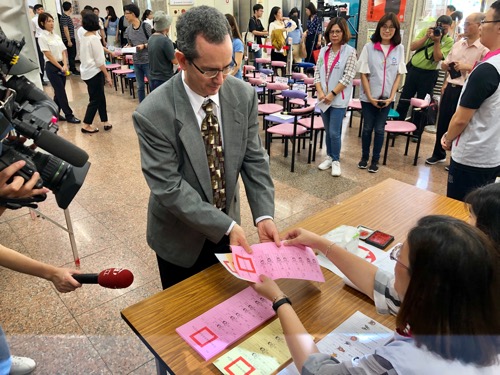 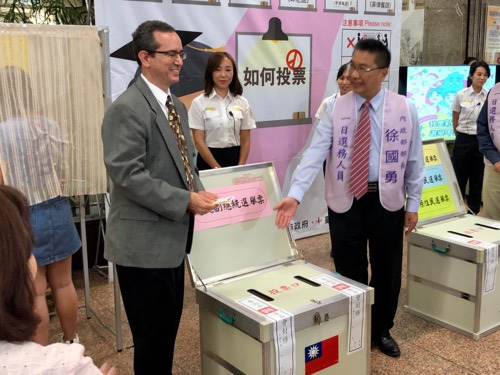