At a press conference organized by TCAPO, one of the meals that caught the most attention was a steak dish presented in bite size pieces with tomatoes and baby corn. The dish, which was made by the Always Sunshine cafe, is served with steamed rice and dog biscuits on separate plates.

"We encourage dogs to eat at the same table with their owners," she said. "Due to the weather being so hot right now, we have also worked with a veterinarian to develop an ice cream that includes probiotics for dogs."

Another dish was unseasoned burger meat on a bed of cauliflower and broccoli made by the Aloft Taipei Beitou hotel.

Hailey Chen (陳怡樺), Aloft Taipei Beitou marcom supervisor, said the dish is one of three choices that the hotel provides free for pets when they stay overnight at the hotel with their owners.

The other three dog meals showcased by TCAPO was a vegetable and chicken rice risotto made by Yoh Italian Trattoria, chicken meatballs served with diced vegetables made by Pao Ma Mi Ke Ssu cafe, and a steak rice dish tossed with vegetables and egg made by PS Bubu restaurant. 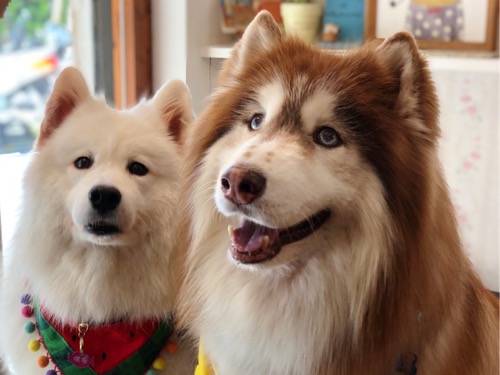 Michael (right) the husky and Puyo (left) the samoyed 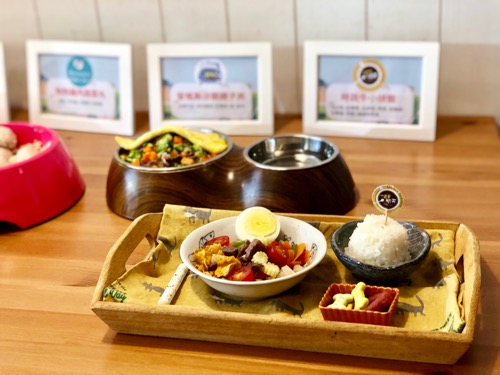 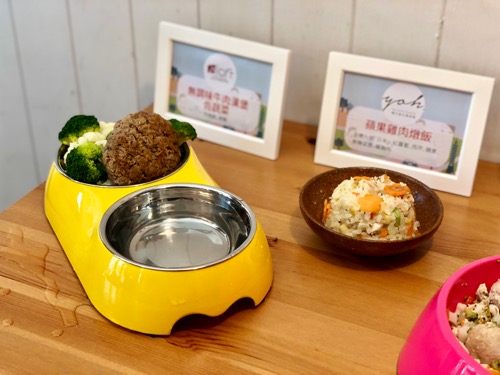 Sung Nien-chieh (宋念潔), TCAPO director, told CNA that a number of checks will be conducted in order for premises to be officially recognized as a pet-friendly eatery.

"After an application has been made, we will send personnel to check if any ingredients used are harmful to dogs," she said. "We will also check to see if the premises have specially designed services for dogs, such as meals, seating, or areas where owners can hook up leashes."

Lin Chung-chieh (林崇傑), Taipei's Department of Economic Development commissioner, said the city currently has 123 pet-friendly premises, of which 78, or 63.4 percent, are eateries.

"We want to make Taipei a pet-friendly city, so that pet owners can go out to more places with their pets," he said. 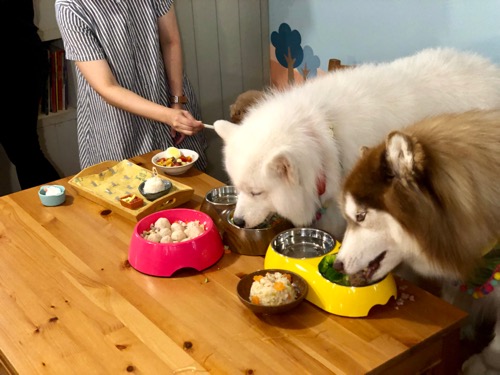 Michael (right) the husky and Puyo (second, right) the samoyed