South Korea, U.S. leading after round one of Taiwan LPGA tourney

New Taipei, Oct. 31 (CNA) Defending champion Nelly Korda of the United States and Hur Mi Jung of South Korea both fired a 6-under 66 Thursday to take the lead after the first round of the Taiwan Swinging Skirts LPGA golf tournament.

Among the Taiwanese players, amateur Hou Yu-sang (侯羽桑) achieved the best score and finished the round tied at 14th.

Korda, who is eighth in the Rolex Rankings, hit seven birdies, one eagle and three bogeys, while Hur, who ranks 22nd, shot six birdies to take a one-shot lead over Minjee Lee of Australia.

"I had a solid day out there," Korda told CNA. "For example, the hole out on 15 was really special. Hopefully, I can keep trending in the right direction."

Korda, who hit an eagle on the 15th hole, said she was happy with her overall performance Thursday, despite the wind and a few mistakes.

"I'm going to take it shot by shot because there is still a lot of golf to be played," said the defending champion, adding that she was really excited about the rest of the tournament.

Hur, who shared the lead after the first round, also said she was pleased because she did not hit any bogeys during the day, although her play was affected by the wind and rain.

Despite the windy conditions, Hur said, she was still able to bounce back with some birdies.

"I had one chip-in birdie, and another, which was like really far, a long putt," Hur said. "I made those birdies and had a lot of lucky shots, I think." Meanwhile, Lee, who shot six birdies and a bogey, said she did not have a strategy to counter the windy conditions.

"I anticipated that it was going to be a little windy today, so I just tried to take one shot at a time," she said.

Among the Taiwanese players, Hou shot four birdies and two bogeys to finish 14th with a 2-under 70.

"I was prepared for the weather today, and I was aware of the difficulties I was going to face, but it turned out that there was wind in some areas that I was not prepared for," said Hou, a university sophomore who is 39th in the World Amateur Golf Rankings.

Going forward, Hou said, she was confident because she was familiar with the course. 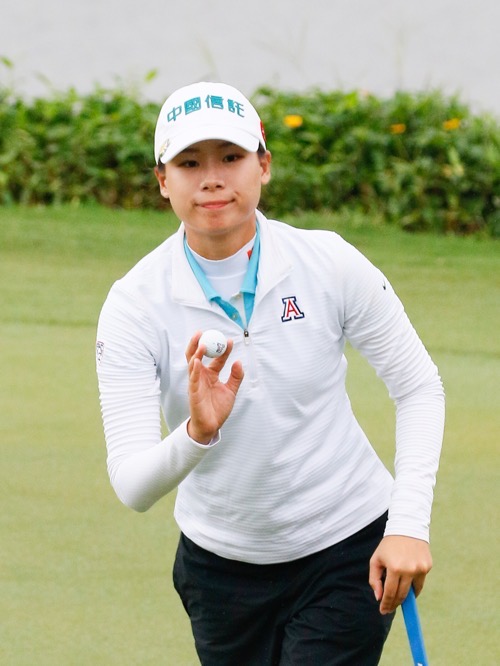 Meanwhile, Taiwanese favorite Teresa Lu (盧曉晴) carded an even-par 72 and ended 29th in the first round.

"My long drives were not that good today," said Lu, who shot three birdies and three bogeys. "I couldn't put the ball where I wanted it when the wind was blowing strong. Because of that I found myself having to make shots in difficult areas." 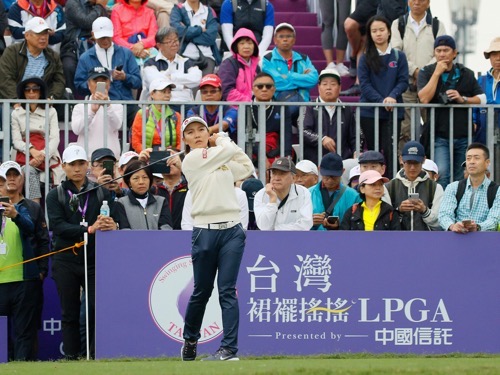 Another Taiwanese favorite, Hsu Wei-ling (徐薇淩) scored 1-over 73 to finish 37th in the first round.

Hsu, who teed off in the same group as Korda and world No. 1 Ko Jin Young of South Korea, shot three birdies, two bogeys and a double bogey.

"Overall my shots did go in the direction I wanted, but I had some problems with the distance," Hsu said.

At the end of the day, Hsu was tied with Ko, who hit four birdies and five bogeys. 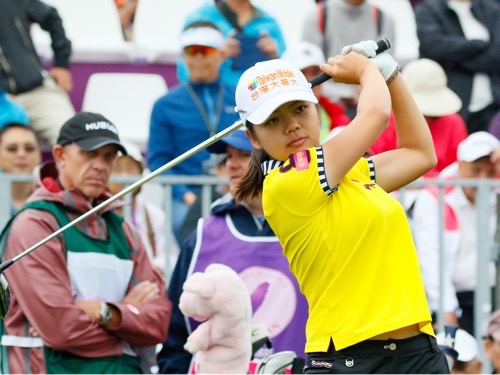 Former world champion Yani Tseng (曾雅妮) of Taiwan did not compete in the tournament, which is being held Oct. 31- Nov. 3.

Over 6,000 fans turned out on the first day at the Miramar Golf Country Club in New Taipei, where 81 golfers from 17 countries are competing for the Taiwan Swinging Skirts LPGA title. 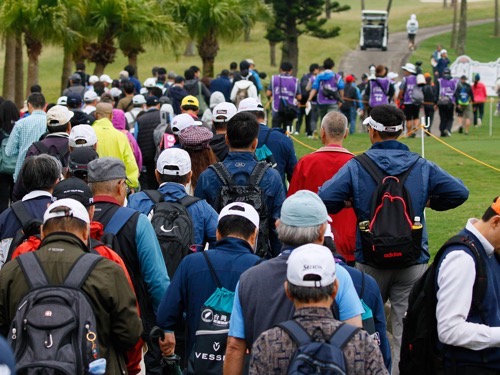