Taipei, Oct. 28 (CNA) A group of foreign dignitaries marched Saturday with tens of thousands of others through Taipei in support of equal rights for lesbian, gay, bisexual and transgender (LGBT) people, saying that the huge turnout was a show of Taiwan's progressive and open-minded society.

In an interview with CNA ahead of the parade, European Economic Trade Offce (EETO) head Madeleine Majorenko said she was happy to take part. "It's a fantastic opportunity to show how wonderful Taiwan is, how fantastic a country it is, and how beautiful and open-minded its people are."

Majorenko said that the EU has always supported liberal countries that put democracy, respect for human rights, and respect for rule of law at the forefront. "Taiwan is a shining star in Asia in this respect," she said.

Taiwan's Constitutional Court in May ruled in favor of marriage equality and demanded that discrimination against same-sex couples under the Civil Code be addressed in no later than two years. The legal reforms, however have been stalled in the Legislature.

Majorenko said that the decision to allow same-sex marriage is a big step forward. "And even if it takes a little bit of time, even if you have to wait for another 18 months, that's worth waiting for, because that is a huge goal which Taiwan has achieved."

She added that the rest of Asia, Europe and the rest of the world can learn from how Taiwan is addressing this issue.

Showing the rainbow-themed windmill the EETO gave to marchers as special giveaways, Majorenko said it is a beautiful symbol of liberty and freedom and being all in it together. "We are all united under the same colors," she said.

Mark Fletcher, head of the political section at the British Office, said Taiwan's LGBT Pride Parade is an important platform for the British Office because it "provides us with an opportunity to send a strong signal of solidarity with LGBT communities, not just in Taiwan, but also in Asia and worldwide."

Asked what made Taiwan's parade the biggest one in Asia, Fletcher said that it has a lot to do with people in Taiwan.

The democratic values embraced by the society and its human rights record are "second to none in the Asian region," he added.

Asked to comment on the oft-cited reason for opposing same-sex marriage -- a lack of public of consensus -- Fletcher said that societal values in Taiwan are changing and young people are more accepting of different ways of living.

"Gender identity and people's sexual orientation are no longer important in the same way that they were. The global trend of reducing bigotry and discrimination is moving forwards very strongly here in Taiwan. We fully support that," he said. 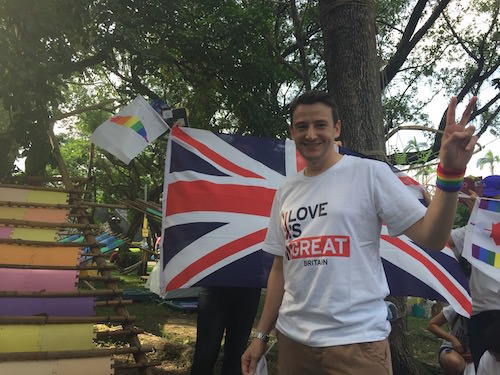 Charmaine Stanley, deputy director of general relations at the Canadian Trade Office in Taipei, said that when marriage equality was legalized in Canada between 2003 and 2005, it was very controversial in her country as well.

"After it was legalized, opposition to same-sex marriage dropped very quickly. The vast majority support it, and we don't really see anyone oppose it. It is very similar in other countries that have legalized same-sex marriage," Stanley said.

A high school exchange student from Turkey, who identified herself only as Su, said that she supports equal rights for LGBT people because "everybody has the right to love who they want to love" and people should not judge others by their sexuality.

The event attracted LGBT activists from more than 20 countries. Naoki Domoto of Tokyo Rainbow Pride, said that he has visited Taiwan to take part in the parade for several years. Compared with gay pride parades in Japan, "people in Taiwan are very open-minded," Domoto said.

Randy, from the Philippines, said he came with his friends from Manila for the parade. "It was my first time in a gay pride march. It's amazing," Randy said.

Jim Wigdel, from San Diego in the U.S., said he took part in last year's gay pride parade in Taipei. He added that he learned about the constitutional ruling and travelled to Taiwan again to "celebrate love."

"Taiwan has the largest gay pride parade in Asia because it is a progressive country," he said.