Taipei, April 20 (CNA) A magnitude-6.3 earthquake that struck off the northeastern coast of Taiwan Monday morning was the biggest temblor recorded in the country so far this year, the Central Weather Bureau (CWB) said.

The earthquake's epicenter was located at sea about 76.2 kilometers east of Hualien County Hall at a depth of 18 km, bureau officials said.

The bureau said the quake, which was detected in Okinawa in Japan at a magnitude of 6.8, was the result of plate movement.

Earthquakes of magnitude 6.0 and stronger are recorded in that area roughly every three to five years, Lu said. There is a chance that temblors of similar magnitude will occur in that part of Taiwan later this year, he said.

Taiwan has experienced three such earthquakes so far this year, which represented a release of energy equivalent to 1.4 atomic bombs, according to CWB data.

On Monday, Japan issued a tsunami warning for areas around Miyako and the Ishigaki Islands, in the wake of the quake.

The Japan Meteorological Agency (JMA) estimated that a 1-meter high tsunami would affect areas around the islands at around 11:30 a.m. Japan time.

(By Chen Wei-ting and Lee Hsin-Yin)ENDITEM/pc 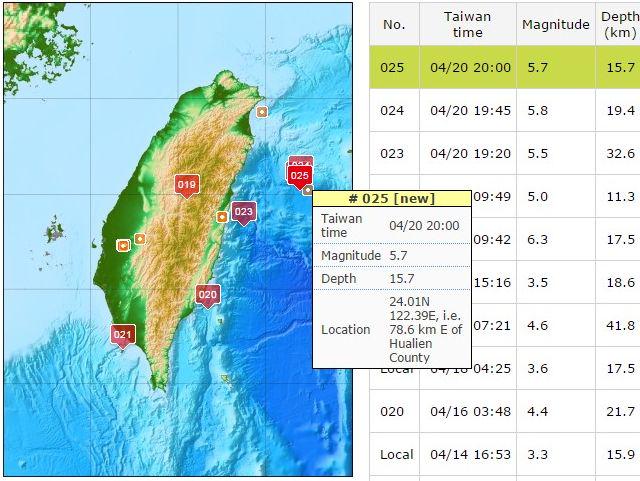 [A school building next to CNA office in Taipei]
Latest
More
We value your privacy.
Focus Taiwan (CNA) uses tracking technologies to provide better reading experiences, but it also respects readers' privacy. Click here to find out more about Focus Taiwan's privacy policy. When you close this window, it means you agree with this policy.
Got it. Learn more