Taipei, Jan. 14 (CNA) A recent plan by the Tourism Bureau to build a sex-themed park in one of Taiwan's scenic areas has drawn controversy, prompting officials to say the idea is still only in the planning stages.

The Southwest Coast National Scenic Area, a popular spot for shooting wedding photos, posted on its website earlier this year a vision of building a "Taiwan Romantic Avenue" that will include a "sex paradise" similar to the Jeju Loveland, a sex-themed park in South Korea.

"(The park) will be the finale of the Romantic Avenue," officials of the scenic area said, explaining that sex-themed sculptures, exhibits and educational videos will be on display in the park in Kouhu Township, Yunlin Country.

There will also be sex toys and interactive facilities on view in the park.

Besides the park, the Romantic Avenue features the many salt pans in the Qigu area popular for dating destinations, and a glass-furnished "Crystal Church" in the Beimen area for holding weddings.

However, controversy over the proposal has prompted the bureau to remove the page.

Shih Chao-hui, deputy director of the scenic area, said that nevertheless, the plan is still under consideration and that further adjustments are likely.

He defended the initiative, saying that there are many examples in other countries to push for similar parks to promote tourism in remote areas.

The fact that there has been a huge reaction online has suggested that the idea could be a decent opportunity, Shih said. 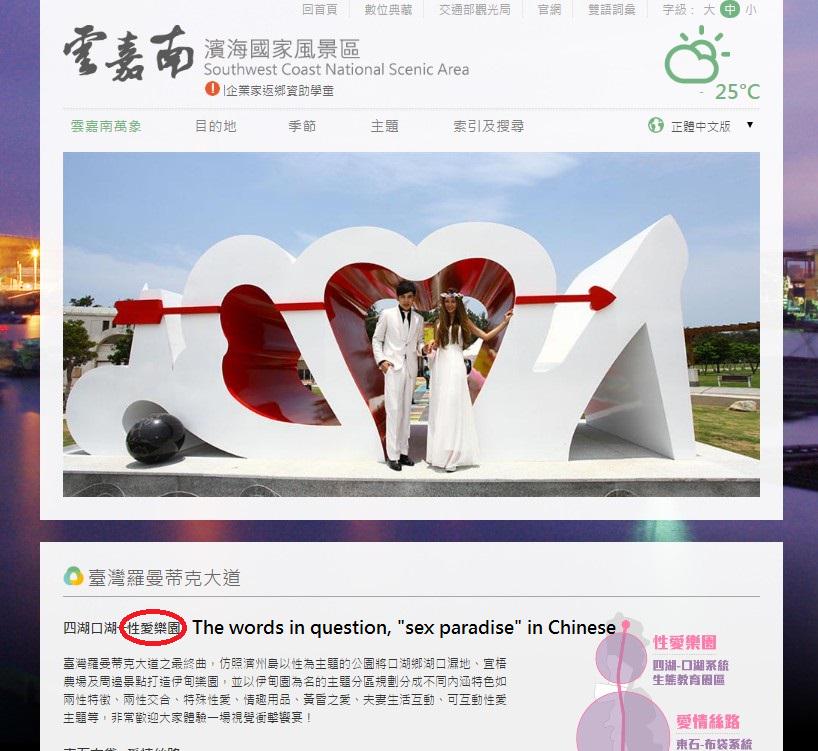 [The cached page of the webpage in question, in Chinese only]