Taipei, April 12 (CNA) Taipei Mayor Hau Lung-bin went to the headquarters of a police precinct Saturday to express support for its chief who became a target of hundreds of angry protesters, warning the city will not tolerate attacks on government offices.

Calling a gathering late Friday in front of the Zhongzheng First Police Precinct "illegal," Hau said both the tolerance of the city's residents and the endurance of the police have reached a "critical point" following a 24-day student-led protest over a trade-in-services agreement with China.

Hau went to the main station of the police precinct after its chief Fang Yang-ning apologized and announced his resignation in front of up to 1,000 protesters who were angry over his handling of a crowd dispersal at the Legislative Yuan early Friday.

The mayor praised the self-restraint of the police force late Friday and also defended the early morning dispersal. "There was nothing inappropriate about the police action," he said.

Hau also said that he would not accept Fang's resignation unless the police chief is found to have broken the law.

Apparently mobilized through social networking sites, the crowd gathered in front of the precinct headquarters near the Taipei main station and demanded Fang's resignation in a direct challenge to police authority which is rarely seen even by Taiwan's standards.

On the other hand, over a hundred thousand people have expressed their support for Fang and the police in general.

A Facebook page set up in that purpose after the protest in front of the police station began collected more than 110,000 "likes" as of 10:30 a.m. Saturday.

Fang was in charge of the operation at the Legislative Yuan Friday morning, which demonstrators alleged broke his promise that there would be no forceful dispersion.

The demonstrators were also angry that Fang reportedly rejected an application by a pro-independence group to continue its sit-in outside the Legislative Yuan.

Supporters of the Alliance of Referendum for Taiwan have held a continuous sit-in since February 2009 but were removed Friday morning along with the remnants of the student-led protest movement that had crippled the nation's parliament for more than three weeks. 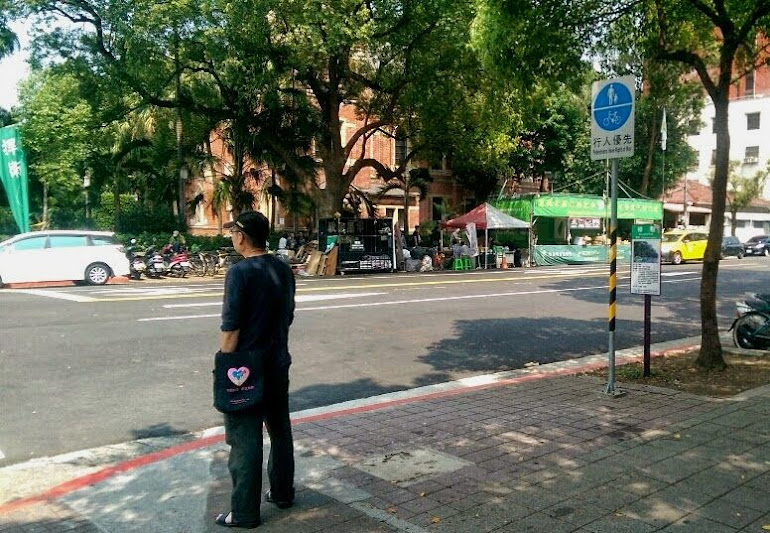 [The green tent on the right is where supporters of the Alliance of Referendum hold their sit-in on Taipei's Jinan Road (map of the location at the end of this article). CNA photo April 12, 2014]

Tsai Ting-kuei, head of the alliance and a former university professor, was hospitalized after throwing himself in front of an oncoming bus as the police were dispersing the crowd.

Fang became a target of anger among protesters on March 23, when he played a part in organizing the police action to remove students who broke into the Executive Yuan compound.

The protest movement against the service trade pact with China had crippled the nation's parliament for over three weeks.

(Click here for a timeline of major developments since the Legislature occupation started March 18.)

Location of the Alliance of Referendum sit-in: ○