Gay community anxious ahead of debate over same-sex marriage bills

Taipei, May 13 (CNA) The level of anxiety is high in the lesbian, gay, bisexual and transgender (LGBT) community ahead of highly anticipated negotiations in the Legislature on Tuesday to reconcile three competing draft bills on same-sex relationships.

The conclusions reached by the item-by-item review of the three proposals will be put to a vote of the full Legislative Yuan on May 17, with the result determining the rights, obligations and levels of protection same-sex couples will be entitled to if they register a legal union after May 24.

May 24 is the deadline imposed by Taiwan's Constitutional Court in its Interpretation No. 748 for resolving the issue after it found the Civil Code's prohibition of unions between two people of the same gender to be unconstitutional.

The interpretation, handed down on May 24, 2017, called for a legislative remedy within two years to guarantee same-sex couples the freedom of marriage and equal protections they are currently denied under the Civil Code.

Many members of the LGBT community are anxious because they worry the provisions stipulated in the Executive Yuan's draft bill could be compromised during the negotiations, Marriage Equality Coalition Taiwan Deputy Coordinator Joyce Deng (鄧筑媛) told CNA.

"Even the Executive Yuan's version only barely meets our minimum standards in term of the rights and level of protection it affords, as it merely allows a partner to adopt the other's biological children, but not their non-biological ones," Deng said.

She argues that Lin's bill has been misleadingly branded as the "compromise version" and that it in fact contains several highly controversial clauses.

One of the unfavorable clauses cited by Deng would allow either party's family members or relatives within three degrees of kinship to request an annulment of a union under the pretext of preventing sham unions.

Members of the LGBT community also fret that some clauses in the bill submitted by Kuomintang (KMT) Legislator Lai Shyh-bao (賴士葆), which was drafted by anti-gay groups and backed by several DPP lawmakers, could also be adopted, she said.

The stakes are equally as high for groups on the other side of the issue.

Tseng Hsien-ying (曾獻瑩), the president of the anti-gay marriage Coalition for the Happiness of our Next Generation, expressed anger at what he called the government's apparent attempt to ignore the opinions of the majority of Taiwanese.

"We have said all we can say. People are getting angrier because the government obviously does not treat them as the masters of the country and seems determined to only adhere to the Judicial Yuan interpretation," Tseng said.

Tseng's reference to majority opinion was based on referendums held in November 2018 when Taiwanese voted overwhelmingly to support initiatives that opposed same-sex marriage.

Nearly three-quarters of voters, for example, supported the definition of marriage in the Civil Code as being between a man and a woman, and two-thirds were against education on homosexuality in schools.

Tseng said his group will continue to make its case to lawmakers before Tuesday's legislative showdown.

As gay rights groups have obtained the right to occupy almost all the roads surrounding the Legislative Yuan on Tuesday and May 17, the anti-same-sex marriage camp is still discussing if there are other ways for their voices to be heard, he said.

Deng said people will be mobilized in support of gay rights on both days to gather outside the Legislative Yuan because the debate and subsequent vote are seen as the last stand for same-sex couples.

The three bills differ noticeably not only in the type of relationship gay couples will be allowed to create, but also how they will be legally described and the minimum age at which they will be able to form a legally recognized relationship.

Differences also exist in the area of adoption of children, with the Executive Yuan's version allowing adoption of a party's biological children and the other two only permitting a form of joint guardianship. 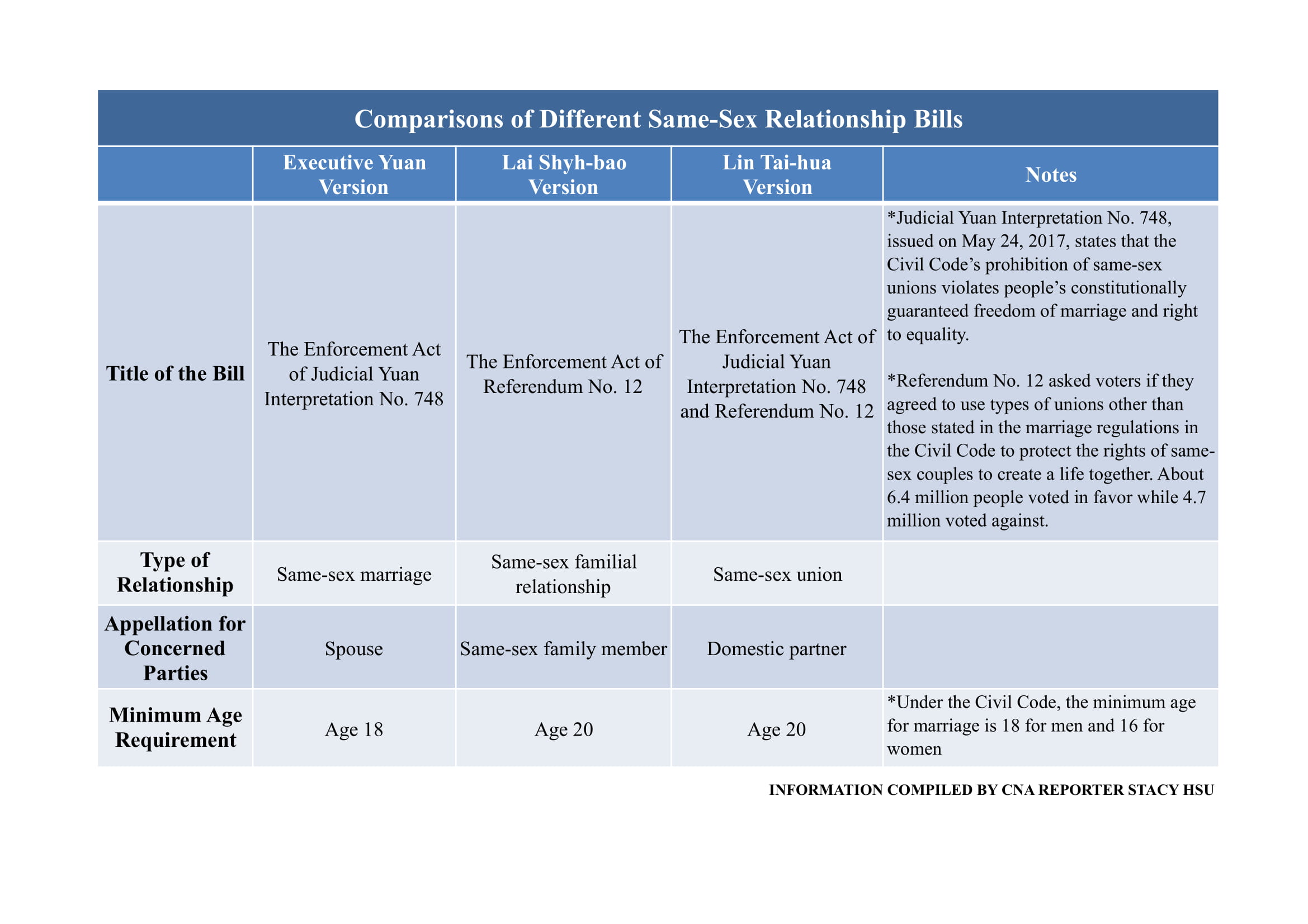 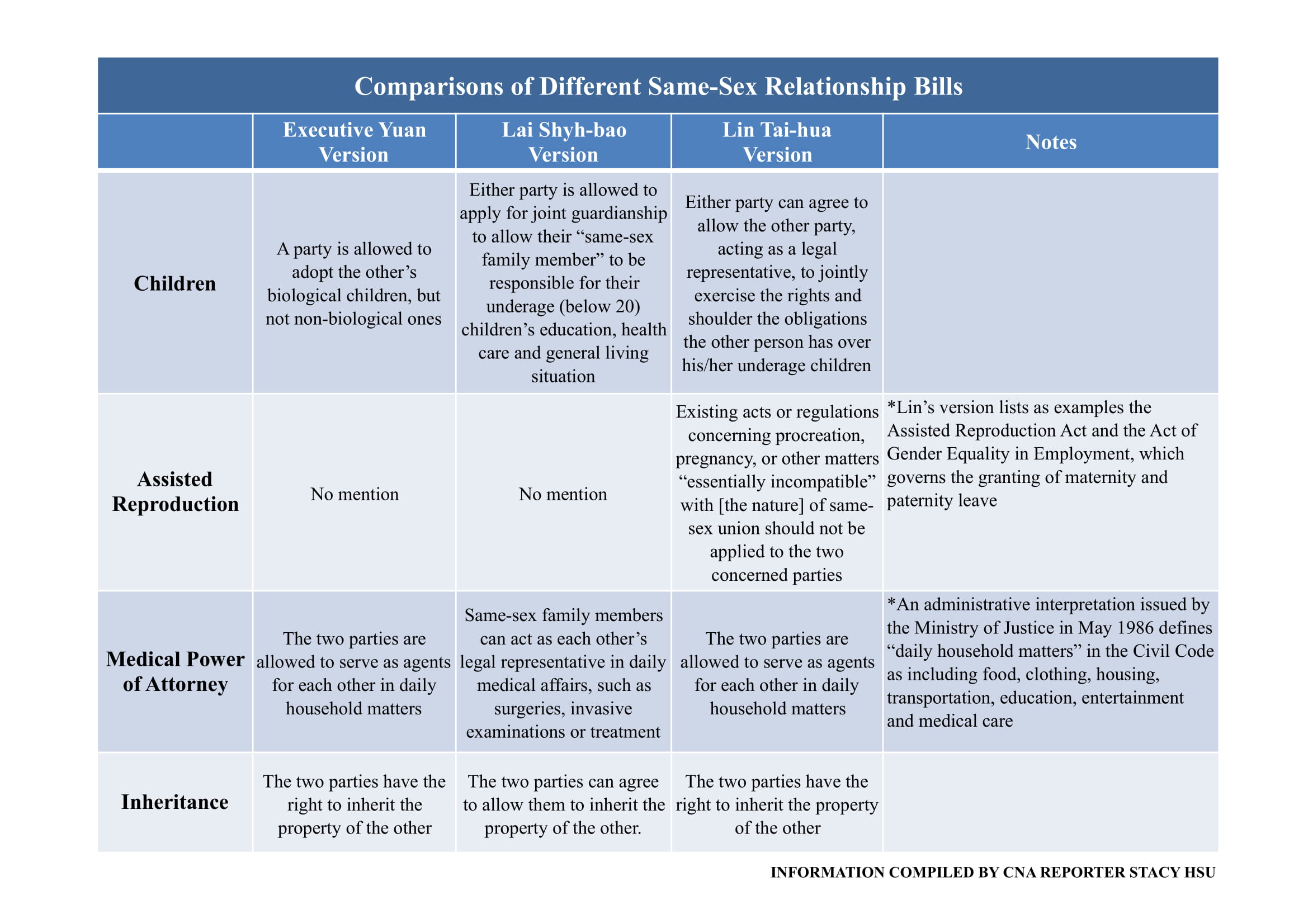 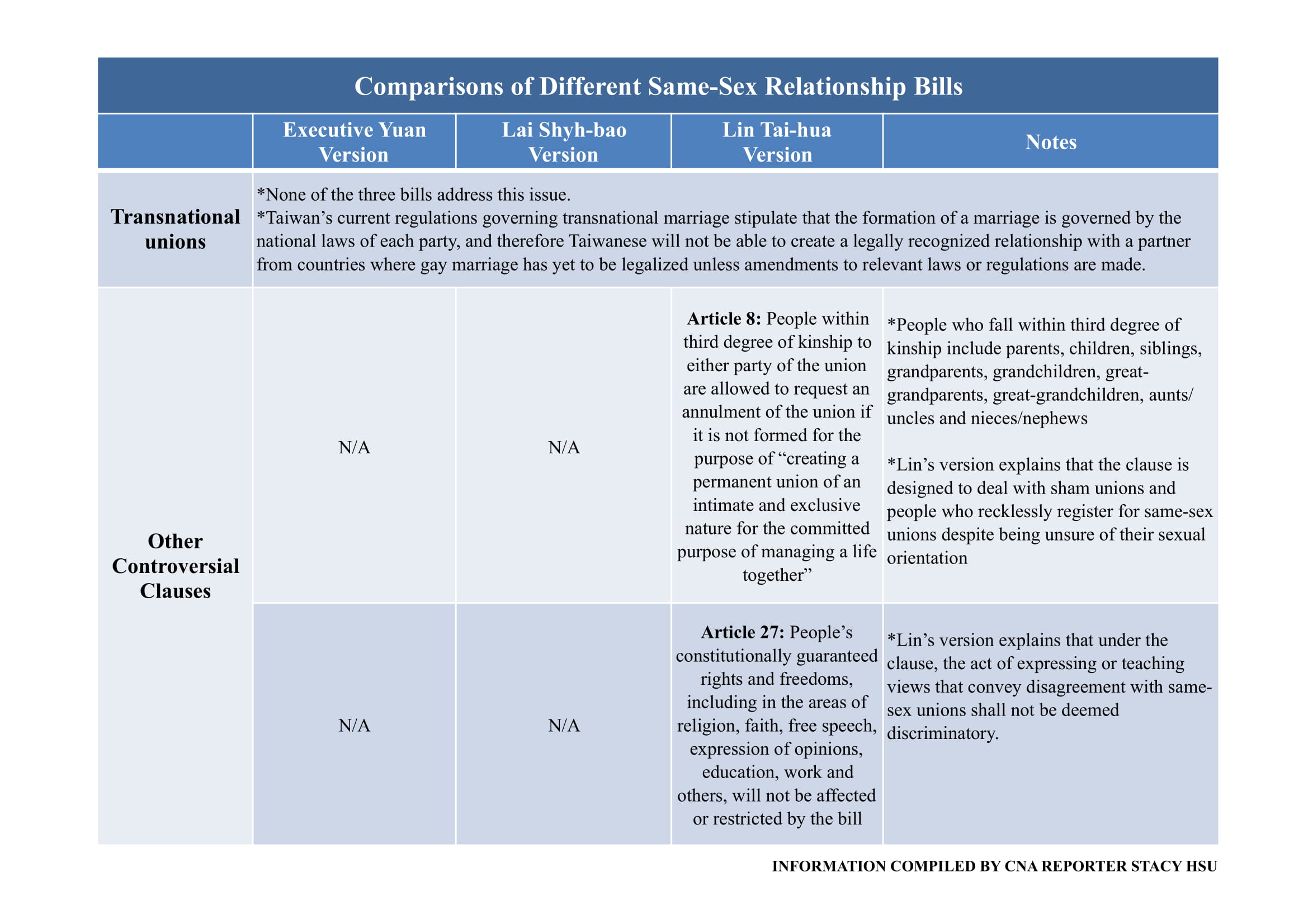