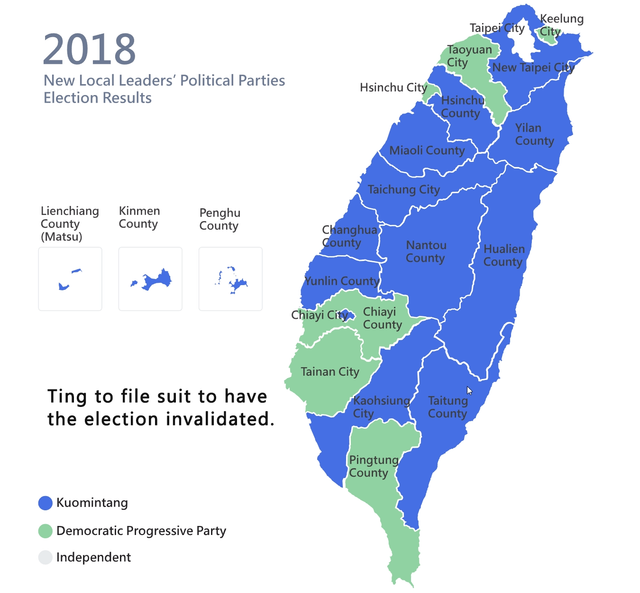 With the elections seen as a mid-term referendum on President Tsai Ing-wen (蔡英文), Tsai campaigned vigorously for the party's candidates across the country during the elections, but the results suggested her appeals were unable to overcome public discontent with her administration.

In the immediate aftermath of the DPP's debacle, Tsai announced her resignation as the party's chairperson, while Premier Lai Ching-te (賴清德) and Presidential Office Secretary General Chen Chu (陳菊) both offered their resignation to Tsai.

Tsai apologized to her party's supporters for its disappointing performance in the elections and said she would take full responsibility for the major setback.

In a speech at DPP headquarters, Tsai said her administration is moving in the right direction and has launched several major reforms over the past two years, but she admitted that Taiwanese people are clearly setting an even higher standard for the party.

The DPP is expected to undergo a major reshuffle to meet the new challenges ahead, she said.

Held along side 10 referendums Saturday, the "nine-in-one" elections that selected candidates to run the 22 mayoral and county magistrate seats and 11,025 local offices has dramatically reshaped Taiwan's political landscape as they did in the last polls in 2014.

In all, in the 22 races, the DPP lost seven of the 13 cities and counties it previously held -- the special municipalities of Taichung and Kaohsiung, Chiayi City, and Yilan, Yunlin, Changhua and Penghu counties.

The DPP was left with six, including the special municipalities of Taoyuan and Tainan, Keelung and Hsinchu cities, and Chiayi and Pingtung counties.

Winning at least 15 seats in Saturday's elections (with a chance to add one more in Taipei), the KMT regained its footing after being badly defeated in the 2014 local elections, when it was left with only six seats, and its loss of the presidency in 2016.

The KMT kept all of the seats it previously held in New Taipei, Miaoli County, Nantou County, Taitung County and Lienchiang County, won the seven from the DPP, and also won KMT-aligned Kinmen County and Hualien County previously run by independents.

The vote Saturday was also seen as a prelude to the 2020 presidential and legislative elections, which are scheduled to take place in January in about 14 months time.

During the campaign, Tsai repeatedly urged people to rally behind the DPP to counter China's increasingly aggressive stance on Taiwan since she came into power in May 2016 and its attempts to meddle in the elections, and to give a boost to her reform agenda.

But a combination of factors might have worked against support from the pan-green camp for her party, including a backlash against reforms such as the labor and pension system, impatience with the slow pace of delivering on her campaign pledges, or frustration at her China policy.

(A polling station in Kaohsiung)

One of the closely watched races was Kaohsiung where the KMT's Han Kuo-yu (韓國瑜), seen as a political outcast who moved to Kaohsiung a year ago, flipped the seat in the largest city in the south where the KMT had lost every mayoral election since 1998.

Han focused his campaign on the issues that have long faced Kaohsiung, such as the economic plight of ordinary people and lack of decent paying jobs.

In the run-up to the election, however, the DPP played the China card, attributing the unexpected surge in his popularity to China's influence operations on social media platforms.

The DPP repeatedly emphasized the challenges such disinformation campaigns pose to Taiwan's democracy to rally the party's base, but the DPP's Chen Chi-mai (陳其邁) still ended up losing to Han by a stunning 9 percentage points.

In another race in Taichung, incumbent Lin Chia-lung (林佳龍) of the DPP lost to the KMT's Lu Shiow-yen (盧秀燕), who focused her campaign on economic issues and the persistent problem of air pollution that has fueled public dissatisfaction.

The unfavorable political climate for DPP candidates also saw a surprisingly narrow victory for the DPP in the party's traditional stronghold of Tainan, with the party's Huang Wei-che (黃偉哲) beating the KMT's Kao Su-po (高思博) by less than six percentage points.

In the northern heartland of Taipei and New Taipei, which represents about one-third of Taiwan's population, the DPP performed even worse.

The KMT's Hou You-yi (侯友宜), who resigned as deputy mayor in February to run for the post, won his race by 15 percentage points over the DPP's Su Tseng-chang (蘇貞昌), who was country magistrate from 1997 to 2004 before the county was upgraded to a special municipality in 2010.

In Taipei, the DPP's Yao Wen-chih (姚文智) received less than 18 percent of the vote, a record low for the DPP in the city's history in a race involving three major candidates, presumably due to pan-green supporters voting strategically for Ko to prevent a KMT victory.

One complicating factor in this year's elections were the inclusion of 10 referendum questions that were blamed for long lines and waiting times outside many polling stations across the country.

Some voters said they waited for more than two hours to cast their ballots, something that has generally been unheard of in previous nationwide elections.