Organizers call for submissions to feature at French comic festival

Taipei, Sept. 10 (CNA) Taiwanese artists have been invited to submit their works for a chance to be exhibited at the Taiwan pavilion of a prestigious annual large-scale comic festival to be held in France early next year, the pavilion organizers said Tuesday.

Lin Yi-chun (林怡君), senior managing editor of Locus Publishing Co., told CNA that they are now accepting works by Taiwanese artists who would like the opportunity to have their works exhibited at the Taiwan pavilion of the 2020 Angoulême International Comics Festival.

A total of three artists will be accepted to join a group of some-seven Taiwanese comic artists to be exhibited at the festival, Lin said.

The other four Taiwanese artists will be Penpoint and NIN, who have been invited to serve residencies at the Maison des Auteurs artists residency program in Angoulême, in addition to two other artists to be announced later.

Other regulations that allow an artists to qualify to submit their works include if they have had their comics published by an publisher overseas, published over three comic books and still have new works in progress within the last two years, according to the check list.

The artist and his or her works will be evaluated by a panel of experts convened by the Ministry of Culture, Lin said, adding that the cutoff date for submissions is Oct. 5.

Meanwhile, at a press conference Tuesday, Taiwanese comic artist Li Lung-chieh (李隆杰), who was one of the artists exhibited at the festival's Taiwan pavilion this year, shared his experience with artists planning to make submissions for next year's festival.

Li, who received the Comic of the Year title for his historical work "Koxinga Z (1661國姓來襲)" at the 9th Golden Comic Awards in Taipei in October last year, encouraged Taiwanese artists to try out for the event.

"I think the Taiwan pavilion at the festival will become an important part of Taiwan's comic history because it provides a stage for Taiwan's comic culture," Li said.

The sooner young aspiring artists get in touch with the different ways comics are presented in different parts of the world, the more advantageous it will be, he said, adding that he himself has gained a lot from the experience.

The festival next year will mark the ninth time a Taiwan pavilion has been showcased at the event. The event has been held in January every year since 1974 and features workshops, meetings, classes and exhibitions. 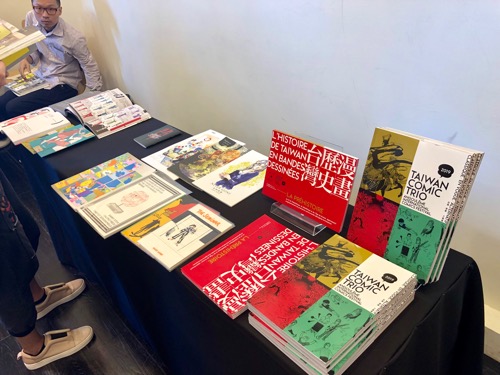