Over 600 artworks return home to Taiwan from America

Taipei, Aug. 28 (CNA) Over 600 Taiwanese artworks officially returned home to Taiwan after the Ministry of Culture (MOC) accepted a collection donated by a private American museum at a ceremony in Taichung on Wednesday.

A total of 652 pieces of art, which go back as far as the Japanese colonial period, were donated by the Sun Ten Museum, founded by Hsu Lin-lun (許林碖), wife of Sun Ten Pharmaceuticals founder Hsu Hung-yuan (許鴻源), in Irvine, California, United States in 1993.

The museum aims to promote Taiwanese art, education and culture, in addition to introducing Taiwanese artists to the world, according to its website.

One of some-32 paintings on display at the ceremony was an 88- centimeter-by-127-cm oil on canvas painting, titled "Cows going back to pasture (歸牧)," painted in 1977 by late Taiwanese artist Yen Shui-lung (顏水龍). 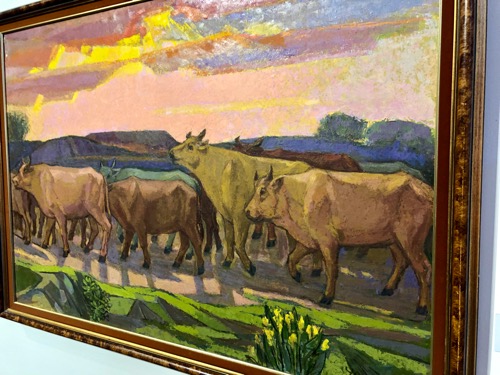 Cows going back to pasture

The artwork shows cows under the setting sun, capturing the beauty of life and drawing viewers in with its rich colors.

Yen was born in Tainan in 1903 while Taiwan was under Japanese colonial rule and studied western painting at the Tokyo School of Fine Arts. He is remembered for his promotion of arts and crafts, in addition to his efforts to beautify several Taipei City landmarks that set an early example for Taiwanese public art and landscape design.

Another painting on display was the undated 24 cm by 33 cm oil on canvas artwork "The Park (公園一隅)," painted by late Taiwanese artist Liao Chi-chun (廖繼春), which portrays the passion of life through different layers of the color green. 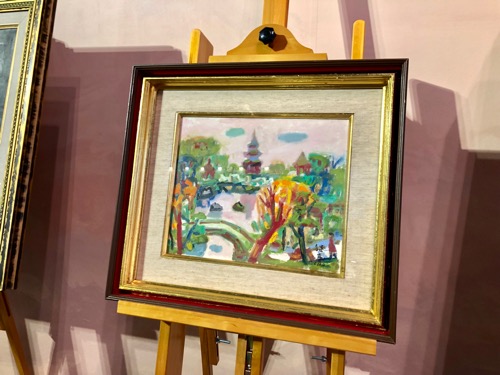 Liao was also born during Japanese colonial rule in 1902 in Taichung and later enrolled in the painting division at the Tokyo School of Fine Arts. His work mainly focuses on landscape and still life that demonstrate a bold use of color, such as bright and saturated reds, greens, yellows, and blues.

Meanwhile, the 31 cm by 40 cm oil on canvas "Chan Hou (戰後)," painted by Taiwanese painter Chen Cheng-po (陳澄波) in 1932, portrays the war time scenes on the streets of the Chinese city of Shanghai following the January 28 incident, a conflict between the then Republic of China army and the forces of the Empire of Japan. 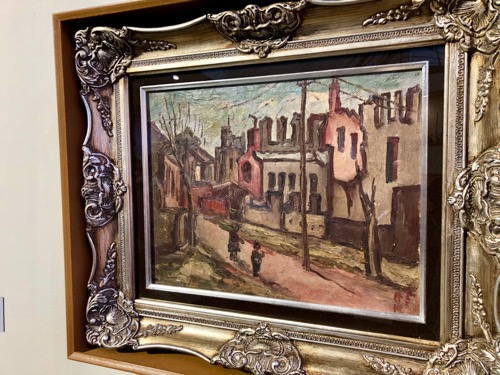 Chen was born in 1895 in Chiayi and graduated from the painting division of the Tokyo School of Fine Arts in 1929.

Prior to being killed as a result of the 228 incident, a people's uprising against the Kuomintang-led government in 1947, Chen devoted his life to education and the development of humanist culture in Taiwan.

Another highlight was the portrait of Hsu Hung-yuan and his wife Hsu Lin-lun, painted by Taiwanese painter Li Mei-shu (李梅樹) in 1980. 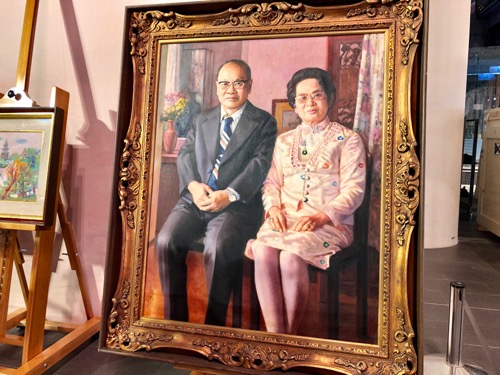 Li was born in 1902 and enrolled in the western painting division at the Tokyo School of Fine Arts in 1929. His paintings were known to demonstrate strong local sentiments and his love for local people and culture.

Charles Hsu (許照信), the eldest son of Hsu Hung-yuan, told CNA that his father has been collecting Taiwanese artwork since the 1950s, before taking the collection to the U.S. around 1972.

However, Hsu Hung-yuan always had a deep connection to Taiwan, and through his long years of collecting the works of iconic artists, he wanted to do his part in preserving precious Taiwanese art history, Charles Hsu said.

"These paintings are not my own, they are the property of the Taiwanese people. One day, I want the entire collection to be returned home, to be returned to Taiwan," Charles Hsu said, citing the wishes of Hsu Hung-yuan.

Culture Minister Cheng Li-chiun (鄭麗君), who officially accepted the artworks on behalf of the MOC at a ceremony Wednesday at the National Taiwan Museum of Fine Arts in the city, said Taiwan is very grateful that the Hsu family has helped to protect the country's art history.

"I believe that Professor Hsu (Hsu Hung-yuan) has always wanted these works to be able to return to their home in Taiwan," Cheng said. "I believe the donation will encourage Taiwanese to understand our own art history."

The artworks are currently being catalogued and organized, and will be displayed for the public in March next year.