Taipei, June 5 (CNA) Over 500 Muslims gathered Wednesday at Taipei Main Station, the main transport hub of Taiwan's capital, to celebrate Eid al-Fitr, the "festival of the breaking of the fast," as they bid farewell to Ramadan, the ninth month on the Islamic calendar.

The roughly 500-600 Muslims, mainly Indonesian migrant workers, joined their counterparts around the world in celebrating Eid al-Fitr by sharing food and exchanging blessings at the event, which was organized by the Taipei City Foreign and Disabled Labor Office. Gifts, including environmentally re-usable eating utensils or fans, were given to attendees who uploaded photos of themselves participating at the event on Facebook, while picnic blankets were also given to those who took part in a Chinese word game.

Taipei Department of Labor Commissioner Lai Hsiang-lin (賴香伶) handed out traditional Taiwan fragrant sachets to those who attended the event as a way to wish them peace and well-being and to make them feel that they are cared for. "The city government would like Taiwanese to treat migrant workers who are working and living here just as they would a fellow compatriot," Lai said.

Surwanti, an Indonesian caregiver who has been in Taiwan for 14 years, said she felt very happy to attend the event because her employers treated her well and were supportive of her attending Muslim religious events. 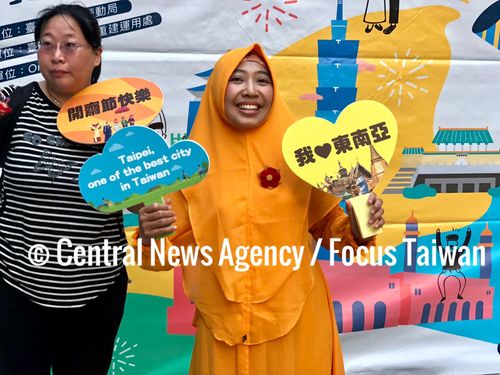 She also said that as a Muslim she was touched that Taiwan organizes these events to make her feel as if she were at home in Indonesia.

Amalina, an Indonesian domestic helper from who has been in Taiwan for four years, said that even though she was far away from her family, she was also very happy to be able to take part in the event because she was able to spend the occasion with her friends.

Taipei Deputy Mayor Tsai Ping-kun (蔡炳坤) said the celebration was important to both the Indonesian migrant worker community and Muslims in Taiwan because they had just shown their devotion by fasting during the day during the month of Ramadan. "I personally think that fasting is not only a religious rite, but also a symbol of human rights, because currently in the world there are many places that are going through rough times, and fasting shows our devotion" to helping others, Tsai said. The event also gave Taiwanese the opportunity to understand the cultures of migrants to promote friendship, said Tsai, who estimated that there were roughly 40,000 Indonesian migrant workers in the city.

The timing of Eid al-Fitr begins with the first sighting of the new moon, so it may vary from country to country depending on geographical location. 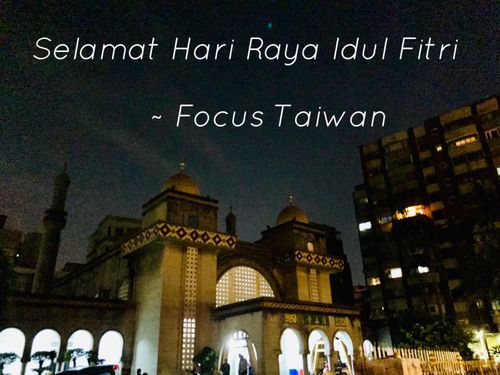 Muslim leaders in Taipei, the Taiwan Imams Committee, issued a statement Monday to say that Tuesday was the 30th and last day of Ramadan, during which worshipers abstain from eating and drinking from sunup to sundown.