Taipei, June 30 (CNA) Dozens of Hong Kong and Taiwanese people staged a silent flash mob at Taipei Main Station Sunday in support of the ongoing anti-extradition bill movement in Hong Kong, with another demonstration to be held Monday, the 22nd anniversary of the territory's return to Chinese rule.

Clad in black shirts, participants in the flash mob held up placards saying "no China extradition," or the June 28 copy of Chinese-language newspaper Apple Daily, which ran a front-page featuring an open letter written by "a group of Hong Kongers in pursuit of freedom" who called for the extradition bill's withdrawal and thanked Taiwan for its support. 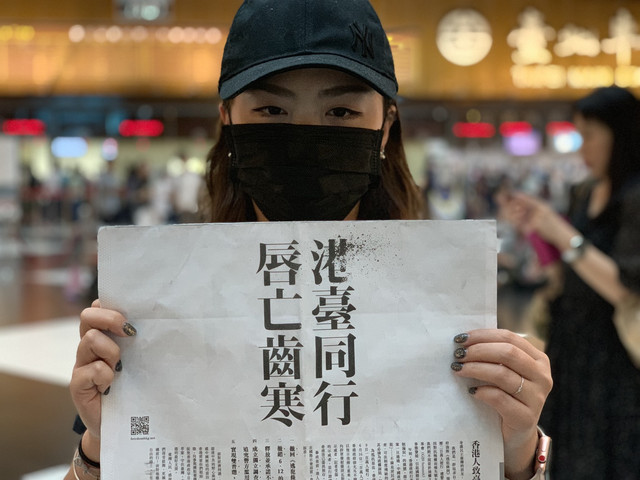 "Although despair is looming over Hong Kong, a large group of people still refuse to give up and are doing their absolute best to keep the (movement's) momentum alive," said a Hong Kong woman working in Taiwan, who initiated the event online and asked to be identified only by her surname Wong (黃).

Wong said she decided to bring together a group of like-minded people for the silent flash mob after seeing over 100 people take part in a similar event in the lobby of New York's Grand Central Terminal on June 28.

Despite several large-scale protests in Hong Kong against the extradition bill, some of which attracted more than 1 million people, the Hong Kong government has failed to meet any of the protesters' five demands, Wong said.

Asked if she worried international attention on the anti-extradition bill movement will fade following the conclusion of the G20 Summit in Osaka, Japan, on Saturday, Wong said although some Hong Kongers have returned to their daily lives, she believed they would still come out onto the streets if there is a protest.

"I do not think Hong Kong people will just put this thing behind them because this is our last chance. If the extradition bill is passed, we may no longer be able to do anything," Wong said. The extradition bill has raised concerns that it could threaten the human rights of Hong Kong residents, as it will allow the Hong Kong authorities to extradite criminal suspects to China.

The Hong Kong government caved in to public pressure and indefinitely suspended the bill's legislative process on June 15, but protesters criticized the move as a "delaying tactic" and demanded the bill be withdrawn permanently.