Turkish rescuers share unique bond with Taiwan due to earthquake

Twenty years ago the Turkish newspaper Star Gazetesi featured a photo that showed several Turkish rescue workers in orange uniforms, with one of them presenting a bouquet of flowers to a middle-aged Taiwanese woman lying in bed and covered with a quilt.

The Chinese characters on the quilt read Changhua Christian Hospital, located in Taiwan's central Changhua County, an area devastated by the 921 earthquake which claimed more than 2,400 lives in 1999.

Next to the photo was another picture of a handwritten note from the woman, which said "If I could stand, I would bow to you with deep gratitude."

Thirty-six Turkish rescue workers arrived in Taiwan immediately after the quake and were dispatched to central Taiwan where they searched for survivors in the rubble of the Lungpang Fukuei Mingmen building.

The building was severely damaged and it was too dangerous for rescuers to enter, so it took almost two days to locate and rescue Liao.

Dozens of Liao's neighbors lost their lives that day and it seemed that Liao, trapped beneath the debris for what must have seemed like an eternity, was close to perishing in the rubble.

"When we explained to her that she was going to be rescued, she was reluctant," Caglar Akgungor, one of the Turkish rescue workers, recalled, when they located Liao 45 hours after the earthquake.

"She said according to her belief, it was her destiny to stay there and die," Akgungor said.

Despite initially refusing to be rescued, Liao was eventually moved by the efforts of the Turkish rescuers to save her.

"I don't know who, but someone told her that it was also her destiny that we came all the way from Istanbul, Turkey to save her," Akgungor added, probably referring to a Taiwanese rescue worker who was there at the rescue site.

"I think she was cool with that," Akgungor said.

Liao was immediately treated with intravenous injection and rescued 50 hours after the earthquake.

Although it is difficult to know Liao's side of the story as she declined requests for interviews with CNA, Emre Ayan, another Turkish rescuer who was part of the 921 earthquake rescue team, still remembers visiting her at the hospital after the earthquake.

"It was quite a touching moment," Ayan said. "We entered the collapsed building in search of a survivor and we found one."

Turkish rescuers in front of a collapsed building in central Taiwan; photo courtesy of Emre Ayan

Akgungor, Ayan and 15 other Turkish rescuers were members of the AKUT Search and Rescue Association, a Turkish rescue group founded in 1996 that now has more than 2,200 members.

The organization's name is an abbreviation of the Turkish words arama (search) and kurtarma (rescue). AKUT, as its name suggests, carries out rescue work when an major earthquake strikes anywhere in the world.

In 2011, AKUT became a member of the International Search and Rescue Advisory Group under the United Nations, a network of countries and organizations dedicated to global search and rescue coordination.

"I remember there was a wall next to our camp, and it was shaking all the time and about to collapse," Ayan recalled about their work in Taiwan.

"When I was sleeping in the camp, there was an aftershock, a really strong aftershock," Ayan said. "I was thinking: Oh, my god, I hope the wall doesn't collapse on me."

The threat of earthquakes is not only physical though, it can also be psychological.

Before coming to Taiwan in late September 1999, AKUT had already conducted operations after the Marmara earthquake in Turkey and the Athens earthquake in Greece in August and early September that year respectively.

Witnessing the devastation left by earthquakes repeatedly in such a short time, the rescue team members suffered mental exhaustion.

"Looking back, I remember I felt pretty much traumatized," Akgungor said. "For a certain period of time in 1999, we all felt like there was going to be a continuous storm of earthquake in the world."

"We felt it was never going to end," Akgungor said.

Despite the ordeal of those rescue missions, the AKUT rescuers still believe in their calling.

"You use so much resources just to reach somebody," Cilasun Bayulgen, another AKUT rescuer during the 921 earthquake, shared what he described as the value of rescue missions.

"It was like a goal was achieved," he said.

"We came all the way from Turkey and it was not for nothing," Akgungor said. "Even if it is one person, one life that was saved, it's worth it." 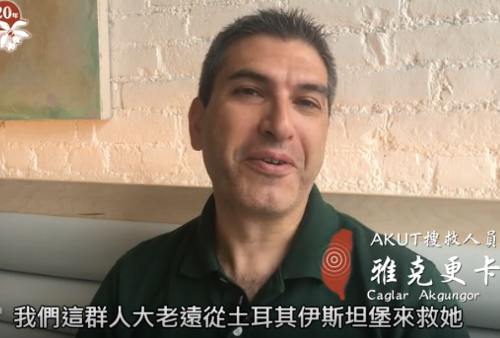 Instead of dwelling on the horrific images of earthquake disasters, the AKUT rescue workers choose to look on the bright side and cherish the bonds shared with people they meet during their missions.

Holding an expired passport carefully in his hand, Bayulgen, now a middle-aged man, told CNA that the 1999 Taiwanese entry stamp in the passport reminds him of his good memories with the Taiwanese people 20 years ago.

It was at the rescue camp in Taiwan, Bayulgen had the first cup of green tea in his life given to him by a Taiwanese man, even though they could not communicate with each other.

"He was just smiling at us, sharing the tea," Bayulgen said. "That was all for me."

Ayan said he was also grateful to the Taiwanese people who took care of him and made sure he had no problems in terms of food or accommodation during his time in Taiwan.

"If there is a good side to the disaster," Ayan said. "It is that it brought the two countries closer together."

"I am sure that when we need help, Taiwanese people will come and help us," he said.