Taipei, Sept. 19 (CNA) The British Office, the representative office of the United Kingdom in Taiwan, held a reception in Taipei Thursday to urge people to act immediately against climate change.

The environmentally friendly event was organized by the British Office that day and held at SPOT Taipei, a grade three historic site that now serves as a multifunctional film house.

Catherine Nettleton, representative of the U.K. to Taipei, told CNA the event was to stress the urgent need to reduce carbon emissions to ordinary people and show they can take action in their own societies to halt climate change and keep it at a level that can be managed.

"We all know that we should be reducing our emissions to a level that can be managed. We all know we can do it, but whether we are doing it collectively around the world with sufficient urgency is another question," she said.

Even though governments around the world are working hard to achieve various frameworks to reduce emissions and using clean renewable energy, each individual member of society should take action through their daily habits, she added.

The event invited many young people because they can influence their families, schools, communities, companies and governments by creating "a snowball effect sense of urgency," she said, adding that it was the policy of U.K. representative offices around the world to hold such events to promote a group effort against climate change.

"Most importantly, in a democratic society people can influence the policies of governments, and consumers can influence how companies do business," Nettleton said.

Cindy Hsu (許文馨), senior prosperity officer in the British Office's Economic and Prosperity Section, said that the event sought to set an example by only serving vegetarian food and drinks, and using only non-disposable cutlery.

Fatima Ali, 22, a medical student at Imperial College London was invited to Taiwan to speak at the event and discuss the perspective of U.K. youth on halting climate change.

She also asked everyone to think globally and act locally by considering the impact of climate change on the entire planet and start by taking action in local communities. 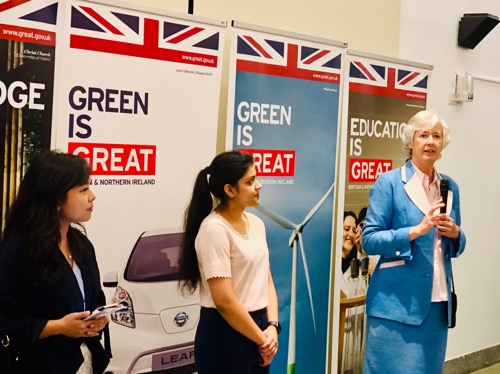 After Ali's speech, about 80 people were invited into the cinema at SPOT Taipei to watch a screening of the BBC's "Climate Change -- The Facts," which showed the science behind climate change and its detrimental effects on the planet.

With the current situation in climate change, certain animal species and coral are dying out, in addition to floods and wildfires happening around the world, the film showed.

The one-hour documentary also suggested potential approaches to combat climate change by showing actions taken by young people around the world who led their communities and societies in reducing carbon emissions. It also showcased scientists who have developed systems that filter carbon dioxide out of the environment.

The BBC's "Climate Change -- The Facts" was first broadcast in the U.K. in April. 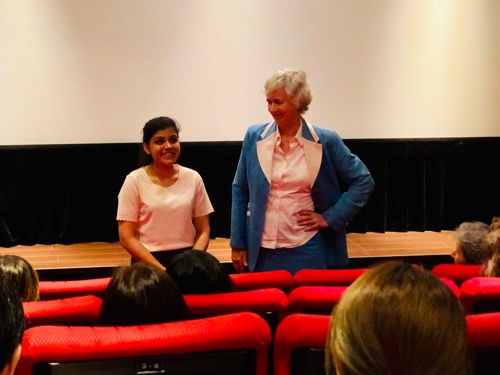 Representative of the U.K. to Taipei Catherine Nettleton (right) and Fatima Ali