Taipei, June 10 (CNA) Migrant caregivers in Taiwan, mostly from the Philippines, demanded Sunday that the government guarantee their basic rights -- weekly days off of at lest 24 consecutive hours -- an internationally accepted standard not enjoyed by 60 percent of foreign in-home caregivers and helpers in Taiwan.

"I want days off, I am a human. I am a foreign worker," read one piece of cloth on a "petition patchwork quilt" displayed at a protest in front of the Ministry of Labor Affairs (MOL).

The quilt was made of approximately 1,000 pieces of cloth mailed to the Taoyuan Domestic Caretaker's Union by migrant caregivers, according to the organizer.

"The pieces of cloth came from caregivers who couldn't participate in the event because they do not have a weekly day off. They cut a piece of cloth to represent their presence," a Filipino caregiver who identified herself as Aileen told CNA.

In-home caregivers and helpers should be given at least 24 consecutive hours of rest in every calendar week, during which time, employers cannot assign them mandatory overtime and they can choose to stay out overnight.

They also demanded that families with patients taken care of by migrants be given a government subsidy with which to manage replacement care for their loved ones when the caregivers are on leave, to encourage employers to grant them reasonable time off.

Currently, families with special needs can apply for respite care, part of a long-term care policy under which short-term care at home or in a nursing facility is available for such families, but families dependent on migrant caregivers are not eligible for the service.

"We want a day off, because we are human," the protesters chanted, led by Ver Marie Dimalaluan, director of the union.

"As humans, we are tired," said Dimalaluan, adding that what they are demanding is already stipulated in their employment contracts.

It stipulates that domestic workers shall have at least 24 continuous hours of free time per week.

Taiwan does not impose a mandatory weekly rest day for migrant domestic workers because they are not covered by the nation's Labor Standards Act, despite repeated calls from international and local human rights advocates.

The population of migrant caregivers and helpers in Taiwan was about 250,000 as of April. Citing an MOL survey, 60 percent of these workers do not get a weekly day off, according to the union.

For those who are allowed one day off a week, most of them have a rest period of no longer than 12 hours, or just five or six hours in some cases, the union added.

This is due to a common misconception among employers that caregivers are not allowed to stay out overnight on days off and the requirement has forced caregivers to be called upon to work when they are at home, even on days off.

"I am here to voice support for caregivers who do not have a weekly day off," Learnie, a Filipino caregiver, told CNA. "For me, it's OK. I can have a good rest on a Sunday or go out to meet with my friends."

Learnie joined the protest with the senior Taiwanese citizen she takes care of.

"Ah gong (grandfather) wanted to come with me. My employer and ah gong also support our appeal," she said. 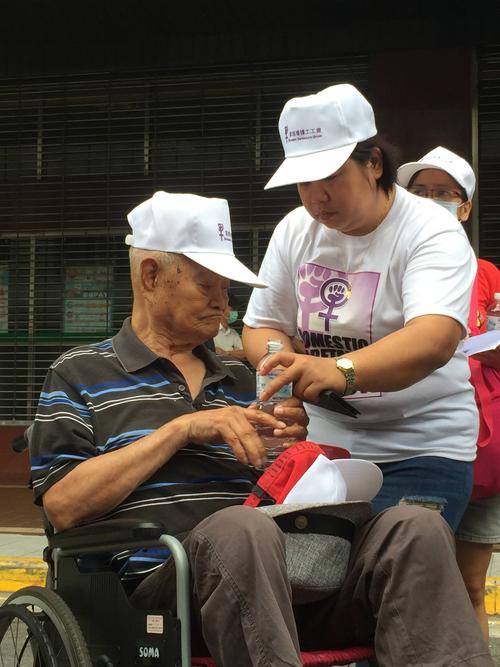 The organizer held the protest outside the MOL Sunday, even though the office was closed, to highlight the fact that government civil servants have a day off, but many migrant workers do not.

As domestic caregivers in Taiwan, "we badly need the support of the MOL to implement our right to days off," they said in a written petition to the ministry, urging it to meet with them to address the longterm issue.