Taipei, Oct. 28 (CNA) Tens of thousands of people marched through Taipei Saturday in a colorful annual parade to call for swift passage of legislation to legalize same-sex marriage in Taiwan, and to demand that gender equality education is adequately implemented in schools.

Rainbow flags and people dressed in flamboyant costumes dominated the streets as the Taiwan LGBT Pride Parade, the largest in Asia, was launched from Ketagalan Boulevard in front of the Presidential Office at 2:30 p.m.

Taiwan LGBT Pride Community, the organizer of the parade, estimated that a record 123,000 people from more than 20 countries participated in the parade, which has attracted additional attention this year after Taiwan's Constitutional Court ruled in favor of same-sex marriage in May.

Three groups of participants paraded around nearby streets before converging again on Ketagalan Boulevard for an evening event.

During the parade, participants tied banners reading "marriage should be equal, education should be diverse" on the iron railings outside the Ministry of Education as they marched past.

Japanese singer MISIA, European Economic and Trade Office head Madeleine Majorenko, gay rights activist Chi Chia-wei (祁家威), and representatives from IBM Taiwan and HP Inc. were among the participants in the parade, which this year had a theme of "Make love, not war -- sex-ed is the way to go."

One of the spokeswomen of the parade, who calls herself Mu (木川), said the organizer hopes to highlight the issue of gender equality education this year because anti-gay marriage groups have stepped up pressure on city councilors, education officials and teachers to not teach such subjects in schools, even though Taiwan passed the Gender Equity Education Act in 2004.

The Act bans discrimination based on gender identity or sexual orientation in schools in Taiwan and stipulates that school curriculums should integrate gender equality education. However, heated debate has erupted over how gender preferences and homosexuality should be taught to schoolchildren.

Mu told CNA that anti-gay marriage groups increased their pressure following the landmark ruling by the Constitutional Court in May.

"We believe that students are not the only ones who need gender equality education. Everyone in society, including parents and teachers, need to be educated on such issues," she said. "We believe that education helps prevent discrimination and bullying."

Mu added that the Constitutional Court ruling is a milestone, "but it is not the end." The public should continue to monitor the content of the legislation to make sure that it recognizes true marriage equality, she said.

Gay marriage advocate Jennifer Lu (呂欣潔) urged the government and lawmakers to quickly amend the law to allow same-sex marriage, instead of waiting until 2019.

Meanwhile, President Tsai Ing-wen (蔡英文) wrote on her Facebook page that while her Democratic Progressive Party has an obligation to design a legal framework that aligns with the spirit of the constitutional interpretation, it also has a responsibility to ensure social unity.

"Therefore, we will continue to make efforts based on these two principles," she wrote.

"We are very proud and happy to be here, because Taiwan is breaking the ice for marriage equality in Asia," Christof Wittig, founder and CEO of U.S.-based gay dating app Hornet, who attended the parade, told CNA.

He said Taiwan's Constitutional Court ruling shows that "we are equal and that diversity is a winning formula also in Asia."

"It's not a Western concept. It's a concept for all humans," he said.

By participating in the parade, Wittig said he hopes his company can help marketers and advertisers become aware that the LGBT community is a powerful economic force.

"Many corporations are shy, and this is stupid because the pink dollar is a big dollar," he said. 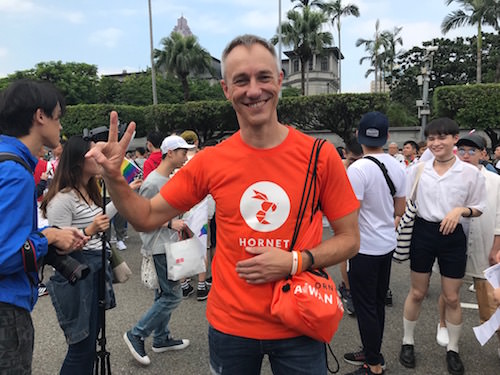 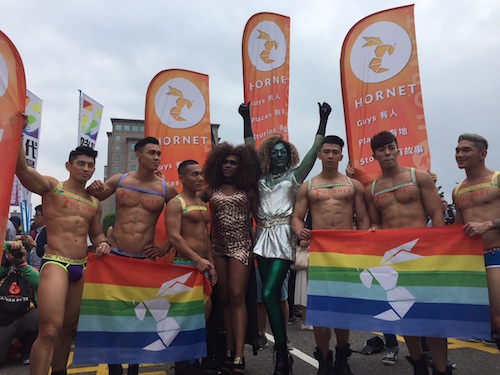 Patrick Wong, a 31-year-old auditor, travelled from Hong Kong to Taipei to attend the parade for the first time. He said he wanted to experience the tolerant ambience of Taiwan toward the gay community.

"Taiwan is a good starting point to inspire the whole of Asia to treat people of different sexual orientation equally," Wong said.

"We are kind of far behind in Hong Kong, so we are looking forward to seeing how Taiwan succeeds," he said, referring to the legalization of same-sex marriage.

Shingo, a 47-year-old IT engineer from Japan who was attending the parade for the sixth time, said he joined the Taipei parade because it is the largest in Asia and because it is "fun and friendly and has a family atmosphere."

Shingo and other members of the "New Rainbow" percussion group gave a lively performance of Japanese taiko drums at the parade. 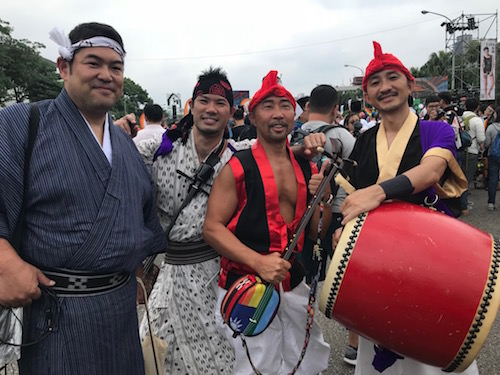 (Shingo (first from the right))

Jake Corry, a 29-year-old English teacher, said he is not a big fan of marriage, but believes everyone should have the right to make the choice.

The Constitutional Court ruling is good for Taiwan "because it puts it in the international spotlight," said Corry, who comes from Ireland.

Abercio Hung (洪瑋駿), a 27-year-old Taiwanese engineer, said he attends the parade every year to learn more about the issues affecting the LGBT community, and this year, he thinks the issue of gender equality education is very important and should be taught to students when they are young.

When he was an elementary school student, Hung said, girls and boys took gender equality lessons apart, but he thinks girls and boys should take these lessons together in order to better understand and respect each other. 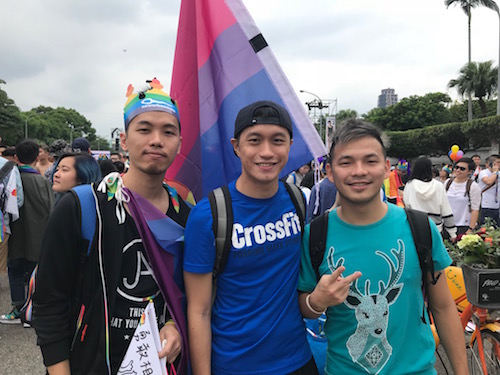 Taiwan is considered to be one of Asia's most liberal countries on LGBT issues.

In its landmark ruling, the Constitutional Court asked the authorities to amend or enact relevant laws to legalize same-sex marriage within two years.

An amendment to the Civil Code that will legalize same-sex marriage and allow married gay couples to adopt children passed an initial reading in the Legislative Yuan late last year, but has been stalled since then.

Gay rights activists have called on the Legislative Yuan to quickly pass the second and third readings of the bill.