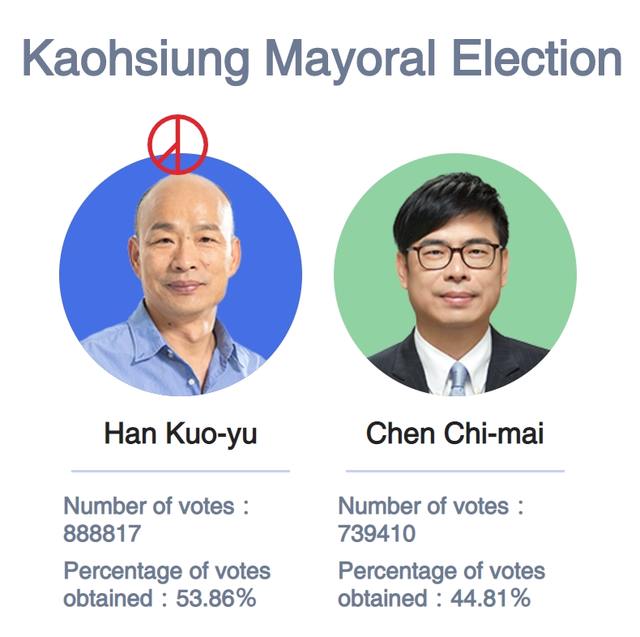 A former president of Taipei Agricultural Products Marketing Corp. (TAPMC), Han entered the mayoral race this year on a platform of addressing the air pollution situation in Kaohsiung and reviving the economy of the southern port city.

Declaring his victory in front of a massive crowd of supporters, Han, who dubbed himself a "bald-headed vegetable vendor," thanked Kaohsiung's citizens for offering him the chance to serve them. He also expressed thanks to Chen, whom he called a "respectable rival."

He further thanked the voters for their demonstration of "love" and "tolerance" for him, which he described as "Kaohsiung values." He was referring to their willingness to elect a candidate from New Taipei without an eminent political or academic background as their mayor.

He pledged to carry out his policy platform, which is to spare no efforts to boost the economic development of the port city that he described as "old and poor."

Vowing to let the world see Kaohsiung's changes in the near future, the mayor-elect said he will begin Sunday to organize his administration team "by recruiting talented people, no matter what political links they have."

"In the future there will be no blue-green partisanship in Kaohsiung," Han said, adding that "all-out efforts will be made to pump up the economy."

The Kaohsiung mayoral seat was vacated in April when then-Mayor Chen Chu (陳菊) of the DPP was appointed secretary-general of the Presidential Office. Chen, who had served as Kaohsiung mayor for almost 12 years, was replaced by Hsu Li-ming (許立明) in an acting capacity.

When Han entered the mayoral race this year, he campaigned on a platform of addressing the air pollution situation in Kaohsiung and reviving its economy.

Over the past few months, Han has been surprisingly successful at whipping up voter enthusiasm that not only placed Kaohsiung -- a traditional DPP stronghold -- in the national spotlight but also raised the profile of other KMT candidates in this year's local elections.

During his time at TAPMC, Han was accused by DPP lawmaker Tuan Yi-kang (段宜康) of profiteering by inflating fruit and vegetable prices. However, the Taipei District Prosecutors Office announced in October that its probe into the accusations was ending and that no evidence of wrongdoing had been found.

However, Han remains under investigation for allegedly overpaying bonuses to TAPMC employees.