Taipei, Sept. 15 (CNA) An Argentinian film that was shot mostly in Taiwan has been receiving largely positive reviews from critics since it was released in the South American country in late August, according to Taiwan's representative office in Buenos Aires.

The comedy drama "Shalom Taiwan" was directed by Walter Tejblum and stars Fabián Rosenthal, who plays the character Rabbi Aaron.

In the movie, Rabbi Aaron and his Jewish community in a small neighborhood in Buenos Aires are facing serious financial problems because of their generosity to the needy.

As a last resort, the rabbi embarks on a trip to Taiwan to seek donations.

Since the release of the movie on Aug. 29 in Argentina, film critics have been giving it good reviews, saying it is a simple, positive and heartwarming story, according to Taiwan's representative office there.

More than 60 percent of the scenes in the film were shot in various locations in Taiwan, including Taipei and New Taipei cities, the office said in press release.

According the office, Tejblum began considering Taiwan as the main location when he learned of its beautiful scenery and the hospitality of its people.

He made up his mind after other directors told him that the application process for filming in Taiwan was relatively straightforward, the office said.

In 2018, Tejblum, his crew and cast traveled to Taiwan twice to shoot the film, with the assistance of the Taiwan representative office in Buenos Aires.

According to the office, Tejblum said he left with a favorable impression of Taiwan and chose the title "Shalom Taiwan" for the movie as a way of expressing his love for the country.

The Hebrew word shalom is commonly translated as "peace" and is used as both a greeting and a farewell.

Taiwan's representative to Argentina Hsieh Chun-teh (謝俊得), his wife and the office staff were invited to attend the premiere of the film at Cine Gaumont in downtown Buenos Aires on Aug. 29. 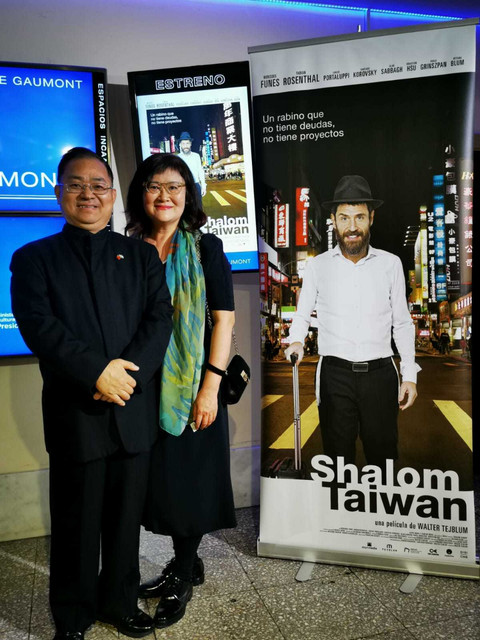 At the premiere, Tejblum thanked the office and all the Taiwanese who helped during the filming. He said the scenes that were shot in Taiwan were completed in as little as four weeks, thanks to the assistance he received from many people in Taiwan.

Tejblum said he would consider filming another movie in Taiwan, if he had the opportunity, according to the office.

Meanwhile, the producer of "Shalom Taiwan" is looking at the possibility of releasing the movie in Taiwan soon, Tejblum said.

"Shalom Taiwan" now being shown in more than 40 cinemas in Buenos Aires, and promotional posters showing scenes of Taiwan can be seen all over the city, according to the Taiwan office there.