Taipei, Sept. 29 (CNA) Tens of thousands of Taiwanese and Hong Kong people braved heavy rain in Taipei Sunday to support the pro-democracy movement in Hong Kong, emphasizing that Taiwan and Hong Kong are in the same boat amid China's threat to democracy. 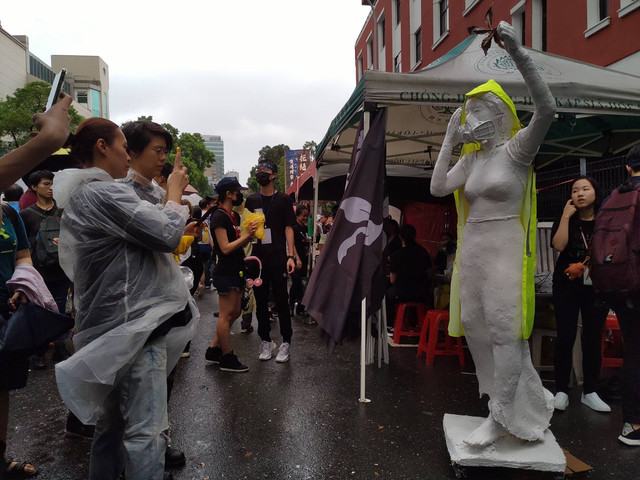 The demonstration, dubbed "9/29 Taiwan Stands With Hong Kong," was initiated by the Taiwan Citizen Front, the Taiwan Youth Association for Democracy, the National Students' Union of Taiwan and the Hong Kong Outlanders. It was supported by nearly 200 other civil groups and youth organizations.

The demonstrators, many of them clad in black, began their march from the Legislative Yuan, chanting "liberate Hong Kong" as they passed through busy districts in downtown Taipei.

"The rain is nothing compared to the storm experienced by the Hong Kong people," a marcher surnamed Tsai (蔡) told CNA, referring to the political turmoil brought by the Hong Kong government's suppression of the pro-democracy movement there.

"I hope one day Hong Kong can enjoy the freedom and democracy enjoyed by Taiwan today," she said. 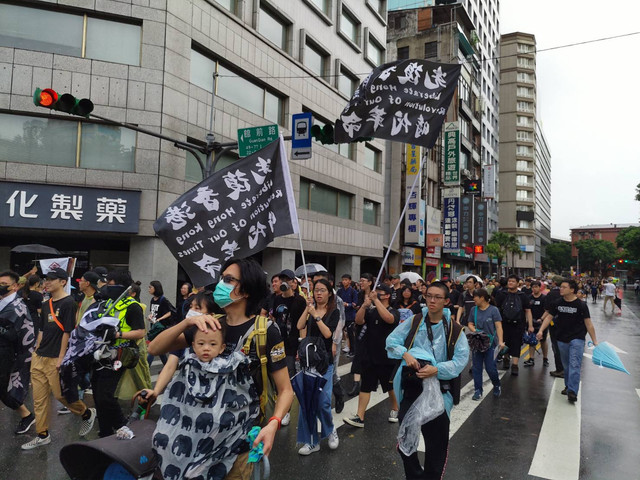 The police deployed 800 officers to maintain peace and order, but despite that, Ho was attacked by two men and sprayed with red paint. An initial police investigation showed that both of them are pro-China unification.

The organizers also claimed that an unidentified person followed a Hong Kong student and attempted to assault him prior to the march.

At a pre-march press conference, Chiang Min-yen (江旻諺), co-founder of the Taiwan Citizen Front, asked the Hong Kong government to respond to all "five demands" of the Hong Kong protesters.

The demands refer to the withdrawal of a controversial bill that would have allowed the extradition of crime suspects to China for trial, an inquiry into police brutality against the protesters, the release of all arrested protesters, ceasing of the use of the term "riots" to describe the mass protests, and the implementation of genuine elections for Hong Kong's leaders.

Among the demands, only the first one has been fulfilled as Hong Kong Chief Executive Carrie Lam (林鄭月娥) announced Sept. 4 that the government would formally withdraw the extradition bill.

The demonstrators also asked the Taiwan government not to negotiate a peace agreement with China and to establish an asylum mechanism that would allow political refugees from Hong Kong and Macao to seek protection.

Lai Chung-chiang (賴中強), also a co-founder of the Taiwan Citizen Front, said signing a peace agreement with China would eventually lead Taiwan into a trap of a "one-China" framework and eventual unification.

Taiwan and Hong Kong both stand in the front line of China's threat to democracy, he said, therefore "we must stand with Hong Kong in the fight against totalitarianism."

At around 6 p.m., the demonstrators returned to the Legislative Yuan for the second part of their program, which included musical presentations, short speeches, and message-posting on a wall beside the Legislative Yuan to emulate what the Hong Kong protesters have done to their government buildings and law enforcement.

Several artworks, such as the Boat of Freedom and a statue of the Goddess of Democracy, were displayed at the site to express the ideology that Taiwan and Hong Kong are in the same boat in the fight for democracy. 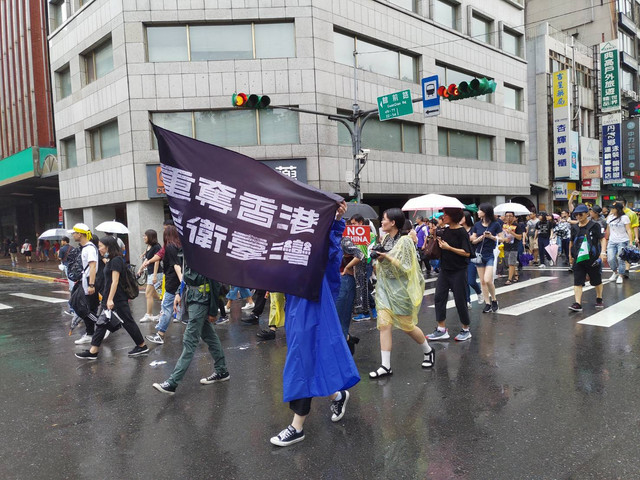