The 12 underwent training at Taipei Rapid Transit Corporation (TRTC), which runs the Taipei MRT, on Sunday afternoon to prepare for the big day. 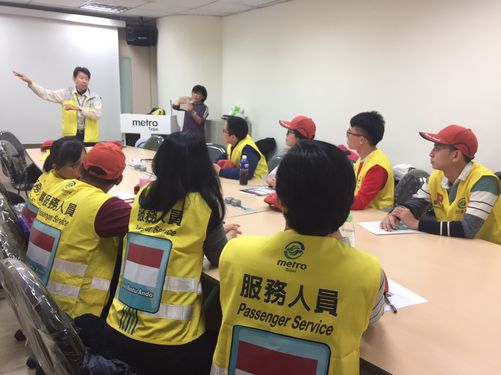 TRTC assistant engineer Chang Li-wei (張立偉), who was responsible for the training, told CNA the three stations were chosen because they were expected to attract the largest crowds of people heading home after the New Year's Eve festivities.

Chang said his company has seen a growing number of migrant workers and tourists from ASEAN countries riding the Taipei MRT to participate in the world-renowned Taipei 101 countdown and fireworks display every year.

But MRT staff have had trouble helping them because of the language barrier, creating problems as huge crowds pack into MRT stations following the New Year's countdown party, he said.

Starting last year, the MRT put up signs in four languages -- Indonesian, Thai, Malay and Vietnamese -- on New Year's Eve to provide important information to passengers from these countries and keep the flow of people in MRT stations smooth, Chang said.

This year, Chang said his company asked for help from Hsu's NGO, which provides foreign workers with information related to work, education and living in Taiwan.

Her group chose workers from Indonesia and Vietnam because the two countries are the largest sources of migrant workers to Taiwan.

The 12 workers were chosen because they did well in a national Mandarin fluency test earlier this year.

Their bilingual skills made them the perfect choice to help migrant workers and visitors from Southeast Asian countries find their destinations during the most crowded day of the year for Taipei's MRT, she said.

According to Hsu, aside from helping with crowd management, they will also answer passengers' inquiries, help them purchase tickets and enter and exit gates, and maintain order inside and outside the stations.

Though they will not be paid for their services, the 12 volunteers said they were happy to help.

Mei Guo Kang, a 24-year-old from Vietnam, said he went to last year's New Year countdown but got lost in the maze-like Taipei MRT system when he tried to return home after watching the fireworks display.

As his Mandarin is getting more fluent, Mei said he was happy to serve as a volunteer to help his countrymen so that they won't end up lost as he was a year ago.

Amini from Indonesia said she had little interest in watching the fireworks show but was more than happy to help her fellow Indonesians enjoy a better New Year's Eve experience in Taiwan.