Taipei, Aug. 14 (CNA) Dozens of protesters on Wednesday picketed the Japan-Taiwan Exchange Association (JTEA), the de facto Japanese embassy in Taiwan, to demand justice and compensation for Taiwanese "comfort women" from the Japanese government in commemoration of the International Memorial Day for Comfort Women.

The term refers to women forced to work in wartime brothels for the Japanese military during World War II.

On Aug. 14, 1991, Korean woman Kim Hak-Sun first broke her story of being a wartime sex slave at the hands of the Japanese Imperial Army. In 2012, several comfort women-related groups decided to set the date as the International Memorial Day for Comfort Women.

Members of other groups such as Amnesty International Taiwan, the Labor Rights Association, the Taiwan Association for Human Rights, the Awakening Foundation and legislators from both the ruling Democratic Progressive Party (DPP) and the opposition Kuomintang (KMT) participated in the event.

TWRF Executive Director Fan Ching (范情) demanded that the Japanese government "formally acknowledge its role in operating the comfort women system and apologize to its victims."

She also demanded that Tokyo compensate the victims and reflect on its wartime responsibilities.

Some of the protesters lamented what they described as the indifference of the administration of President Tsai Ing-wen (蔡英文) since she assumed power in 2016.

Fan stressed that their alliance will continue to fight for justice through legal action and protests until the Japanese government admits its historical wrongdoings. 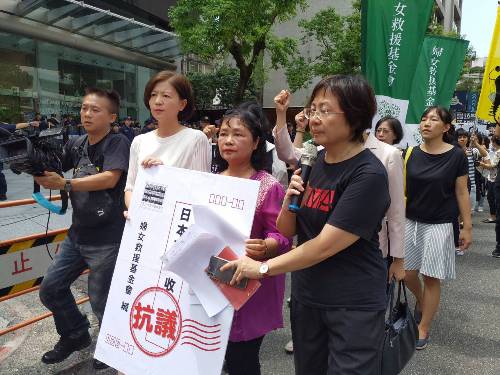 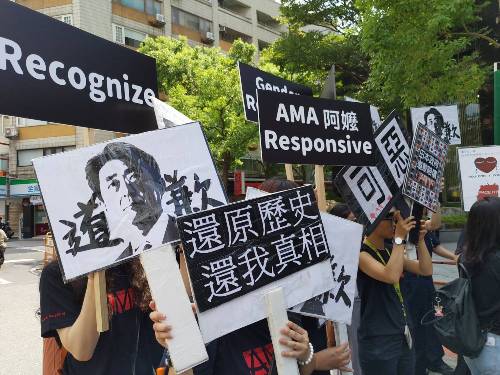 More than 2,000 Taiwanese girls were forced into sexual slavery by the Japanese. Among them, 59 have called the alliance hotline to seek assistance and were later confirmed as surviving comfort women, TWRF media relations officer Anne Kan (甘軒軒) told CNA.

However, only two are still alive, one of them 88 years old and the other 95, she said.

Meanwhile, the Ministry of Foreign Affairs (MOFA) said in a statement that Taipei takes the dignity and welfare of comfort women seriously and has expressed "serious concerns" to Tokyo several times through various channels.