Taipei, Nov. 17 (CNA) Thousands of people gathered in front of the Legislature in Taipei on Thursday to express opposition to or support for a draft same-sex marriage bill that is currently under review by the legislative Judiciary and Organic Law and Statutes Committee.

Police were forced to form a barricade between the two groups as the numbers grew to around 12,000, with people arriving on tour buses, city buses, via the mass rapid transit system, and on foot.

The Happy Family Protection Action Alliance, which is leading the protest against the same-sex marriage bill, said it had mobilized some 20,000 demonstrators, half of them from central and southern Taiwan, but police put the number at 12,000.

Meanwhile, the supporters of the bill were mainly representatives of gay rights groups and totaled about 100.

"No closed-door operation! Save the family!" read the placards held by the opponents to the bill.

During a live broadcast on loudspeakers of the legislative proceedings, the protestors also shouted for the sponsors of two versions of the bill, legislators Yu Mei-nu (尤美女) of the ruling Democratic Progressive Party and Hsu Yu-jen (許毓仁) of the opposition Kuomintang, respectively, to face them. 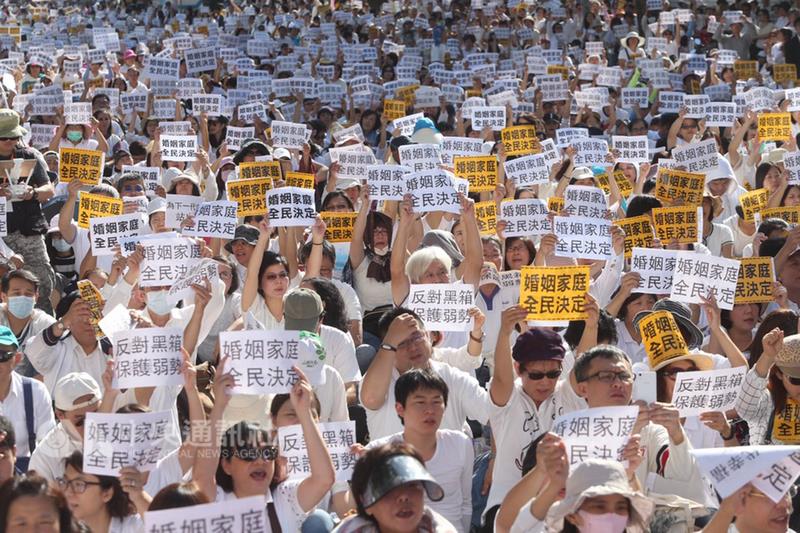 (Anti-gay marriage protesters rally in front of the Legislative Yuan, holding signs that read "Marriage and family, decided by all citizens") 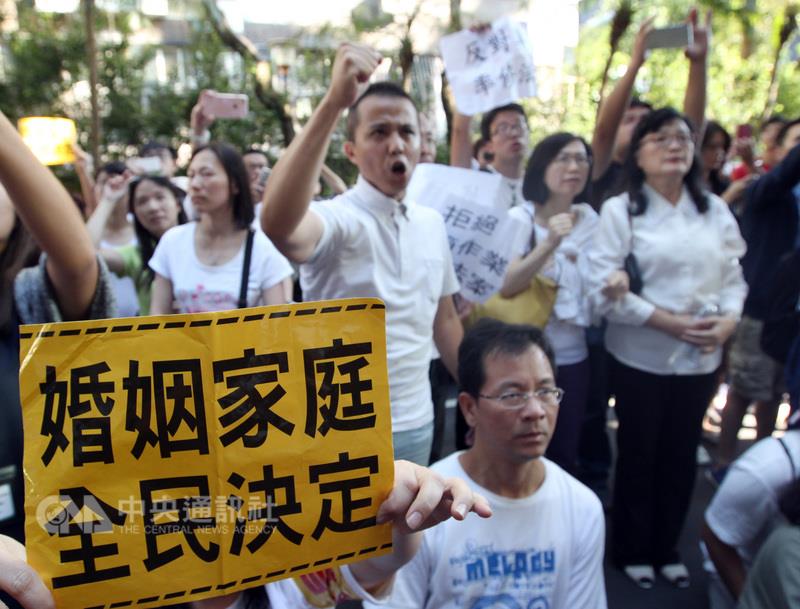 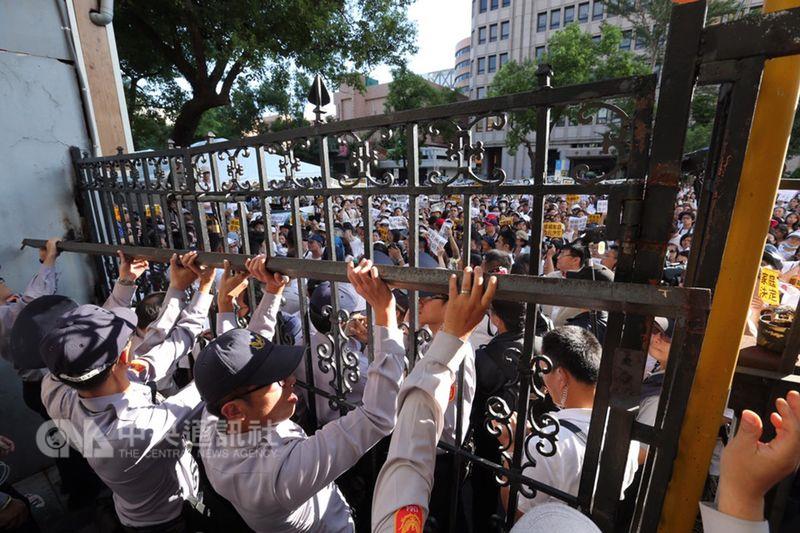 (Anti-gay marriage protesters attempt to break into the Legislative Yuan at around 2:30 p.m.)

One of the supporters, Tseng Chao-yuan(曾昭媛), a senior research fellow at the Awakening Foundation, said over 60 percent of legislators across party lines had expressed support for the same-sex marriage draft bills.

Furthermore, several recent public opinion polls have shown that a majority of people support the legalization of same-sex marriage, she said.

"This has consensus in the society," Tseng said, adding that she hopes the Legislature will pass the bill quickly and will not be pressured by protesters into employing "stalling tactics." 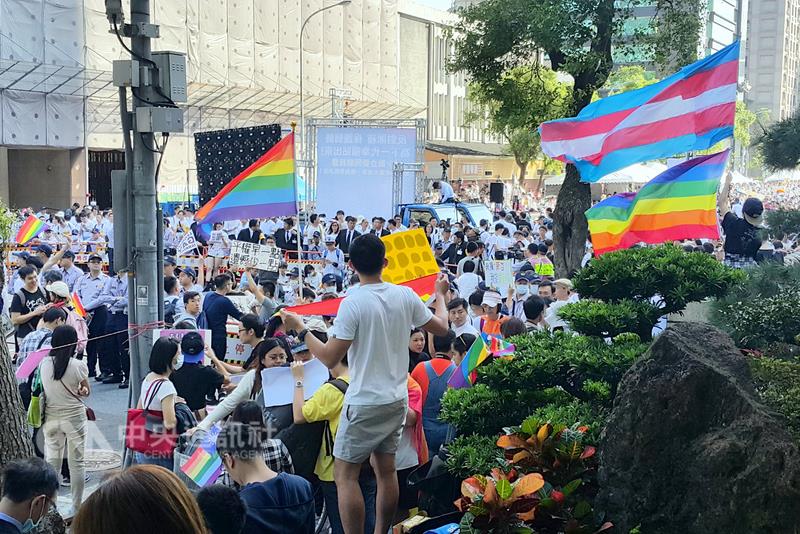 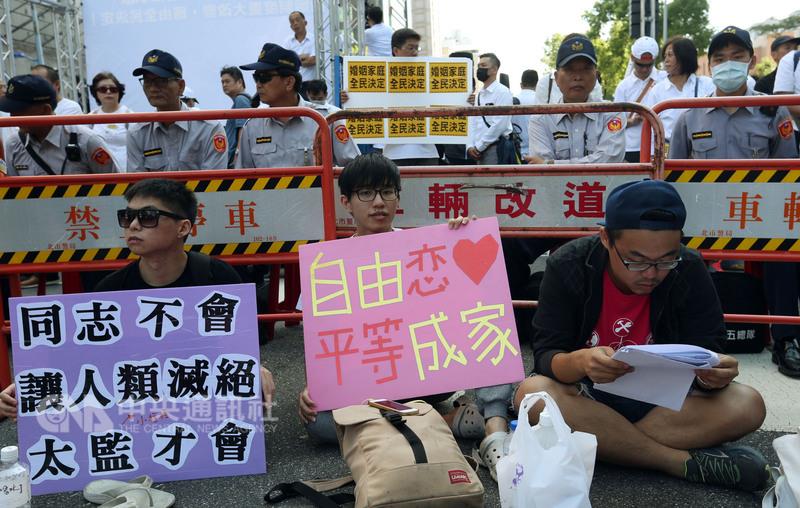 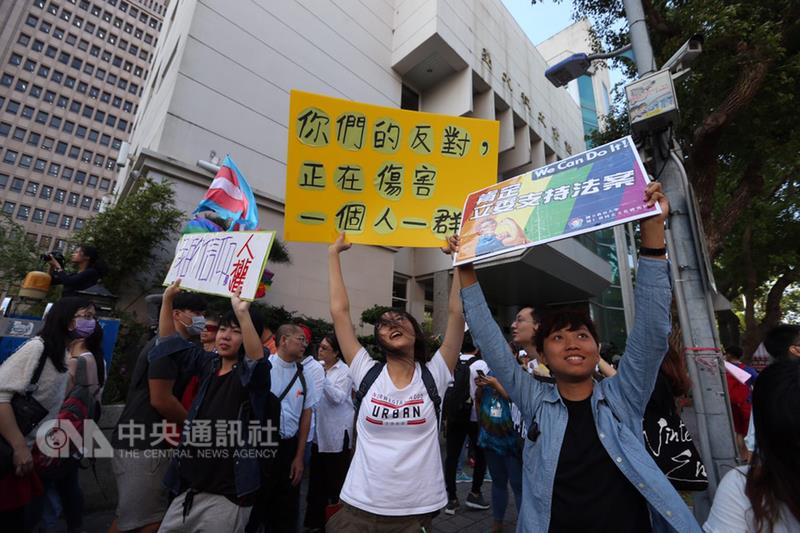 But Chang Shou-yi (張守一), secretary general of the Happy Family Protection Action Alliance, said the issue should be put to a national referendum.

Until then, the bill should be shelved and public hearings should be held to discuss the issue, he said.

If the Legislature rams through the bill, Chang said, his group and others will initiate a campaign next February to "recall those legislators who do not live up to the public's expectations."

Meanwhile, inside the Legislature, scuffles broke out in the Judiciary and Organic Law and Statutes Committee when KMT Legislators called for more public hearings be held and thereafter to be reviewed article by article.

KMT Legislator Liao Kuo-tung (廖國棟), a KMT caucus whip, said that in light of the big public protests against the bill, it should not be rushed through the Legislature.

However, the proposal was overruled by DPP lawmakers, who held a majority, and DPP Legislator Yu said the committee review will continue. At that point, Liao and his KMT colleague Kung Wen-chi (孔文吉) got into a scuffle in front of the podium with DPP legislators Tuan Yi-kang (段宜康) and Tsai Yi-yu (蔡昜餘).

The situation became even more chaotic when a dozen protesters stormed into the Legislature at about 2:30 p.m., shouting for Legislator Yu to face them and calling for public hearings on the issue of legalizing same-sex marriage.

(DPP, KMT lawmakers in a scuffle)

(Lawmakers in opposition to the draft bill propose holding more public hearings, but the proposal was rejected by a vote in the legislative committee)