The rally, which kicked off at 2 p.m. on Jinan Road outside the Legislative Yuan, attracted thousands of participants who held placards shouting "no extradition to Mainland China" and "Taiwan (is) with Hong Kong."

Among the crowd was a 24-year-old Hong Kong student from National Taiwan University of Arts named Rice Ho (何美嫻), who decided to take to the streets because the extradition bill could pose a threat not only to Hong Kongers, but also people from Taiwan.

"Even before the bill is passed, there has been a shadow of 'white terror' cast over Hong Kong. People are afraid of using profile picture frames on Facebook that are designed to support the anti-extradition bill movement in Hong Kong and are warning each other to watch what they say," Ho told CNA.

Ho said some of her friends who participated in extradition bill protests in Hong Kong earlier this month were photographed by police on the scene and were asked to leave their identity numbers.

"They told me they now fear police may come knocking on their doors," she said.

She revealed that Hong Kongers are so concerned about the bill that even her families and relatives who are public servants also took to the streets in protest.

Another Hong Kong citizen, who asked to be identified only as "Cynthia," joined the Taipei rally because she believed "suspension does not equal withdrawal."

"We must stand firm on our position. Even though I am not in Hong Kong, I still need to support my home," said Cynthia, who is currently working in Taiwan after graduating from a college here.

Though the extradition bill may not affect her personally, Cynthia said its passage will be detrimental to Hong Kong's freedom in the long run.

"So regardless of whether the bill is going to affect me and whether I will return to Hong Kong one day, I need to be here to fight for Hong Kong's freedom."

Hong Kong Chief Executive Carrie Lam (林鄭月娥) announced Saturday that her government would suspend legislative consideration of the extradition bill and re-open communication with society on the bill amid a growing controversy.

Organizers of the Taipei rally blasted the move as a mere "delaying tactic," however, and decided to hold Sunday's event as planned to support a separate rally in Hong Kong the same day.

The bill has raised concerns that it could threaten the human rights of Hong Kong nationals, as it will allow the Hong Kong authorities to extradite crime suspects not just to Taiwan and Macau, but also to China and its capricious legal system.

Some also worry that Taiwanese traveling to or transiting through Hong Kong could be sent to China if the bill is passed.

In addition to Hong Kong nationals, many young Taiwanese also took part in Sunday's rally, including a Taiwanese student from National Central University, who asked to go by "Ken" to conceal his identity due to his upcoming trip to China.

The student brought with him a large white cloth with a slogan reading "Taiwan supports Hong Kong" (台灣撐香港) in Mandarin in its center surrounded by scores of hand-written messages left by students from his school to support Hong Kong.

"I have some Hong Kong friends and because summer vacation is coming soon, I thought I could gather some supportive messages for them before they leave," said Ken, who was surprised at being able to fill the banner with encouraging messages in just two to three days. 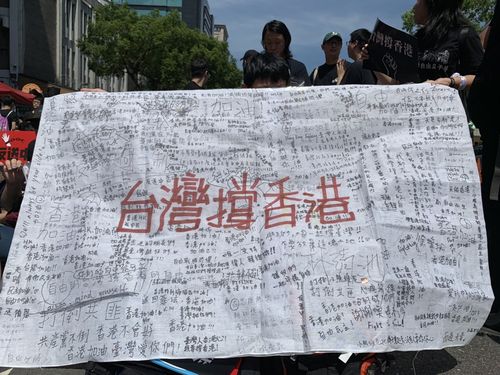 A 17-year-old Taiwanese senior high school student from Taoyuan, Lin Yi-chieh (林奕杰), said it was the first time he has ever joined a social movement.

"I want to come out in support of Hong Kong because (the extradition bill) also concerns Taiwan," Lin told CNA. "Freedom really matters."

Chiang Min-yen (江旻諺), co-founder of the Taiwan Citizen Front, which jointly organized the Taipei rally, said his group was protesting the bill in Taipei because pro-China forces in Taiwan remain powerful.

"Taiwan must not become a second Hong Kong, and we must stand with Hong Kongers to face the serious problem they are saying now," Chiang said.

Cédric Alviani, the head of Reporters Without Borders (RSF) East Asia Bureau, told the crowd that Beijing has shown many times that it needs no solid grounds to punish critical voices, in China and outside China as well.

"If the extradition law was adopted, Beijing would no longer have to resort to abduction. They would simply have the Hong Kong authorities hand over whomever they wish to silence," Alviani said. "Suspending the bill is not enough, it must be rejected once and for all."